Colonel Aide de Camp is awarded for outstanding achievement at the request of a member of the Tennessee General Assembly. It is given by the governor to individuals who have served the state in an exemplary manner.

Urban’s commission was requested by Sparks and signed by Gov. Bill Lee, according to a news release from Spark’s office. 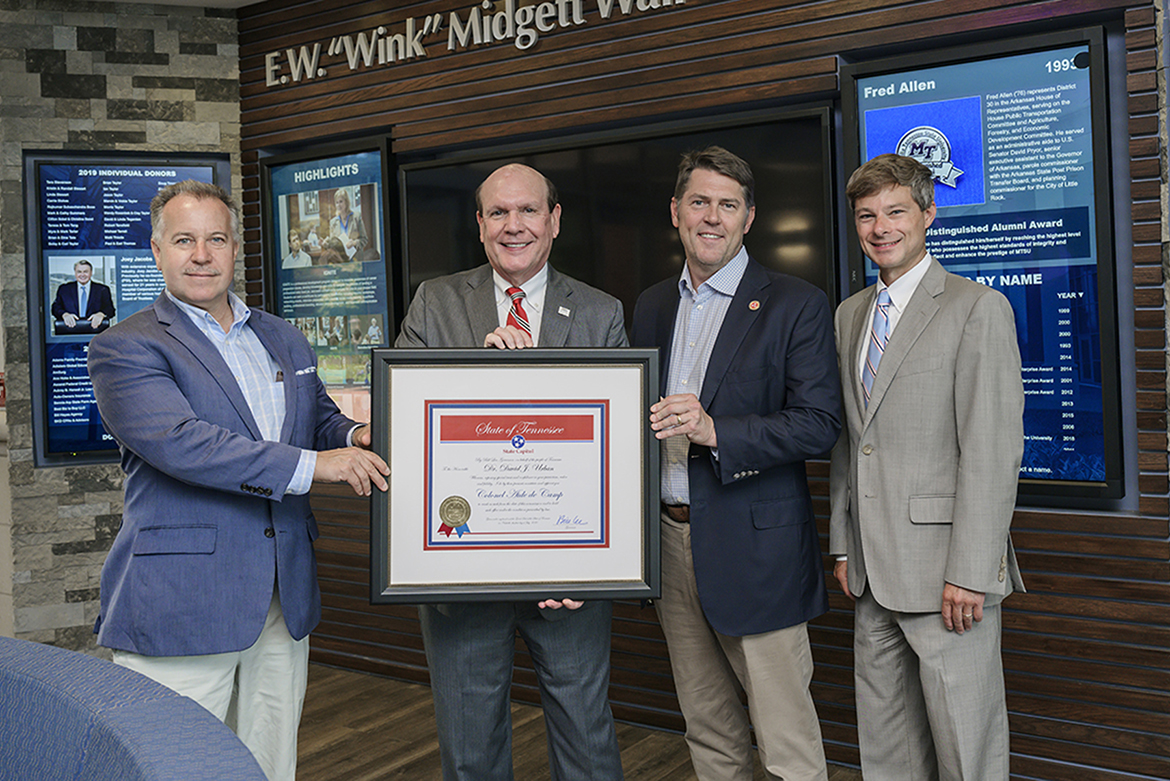 David Urban, second from left, dean of the Jennings A. Jones College of Business MTSU, received this framed certificate after he was commissioned as a “Colonel, Aide-de-Camp,” which is the highest honor granted by the governor of Tennessee. It is conferred for extraordinary service to the state. Pictured inside the Business and Aerospace Building are, from left, state Rep. Mike Sparks, who nominated Urban; Urban; state Sen. Shane Reeves; and state Rep. Charlie Baum, who’s also an MTSU economics professor. (MTSU photo by Andy Heidt)

“When I first met Dr. Urban, I was impressed with his conviction to reach students through new technologies. While I was working on my book, ‘Learn to Barter’ I interviewed him regarding my concern about the national debt,” Sparks said in the release. “He brought up the $1 trillion in student loan debt and that he was concerned for students. That was about seven years ago; now, that debt has almost doubled to $1.7 trillion. It is an honor for me to recognize him as a great leader in our state,” Sparks said.

Urban has served as dean of the Jennings A. Jones College of Business since July 2013. In his role as dean, he manages 3,100 students, 150 full-time faculty and staff, a budget of $22.5 million in state funds and $11.3 million in private funds, the release states.

Among his major achievements is the establishment of the Political Economy Research Institute (PERI), which supports students and faculty conducting research on free market principles on societal well-being.

Urban also spearheaded the reengineering of the Jones College Master of Business Administration degree program and the establishment of other market-driven academic programs. 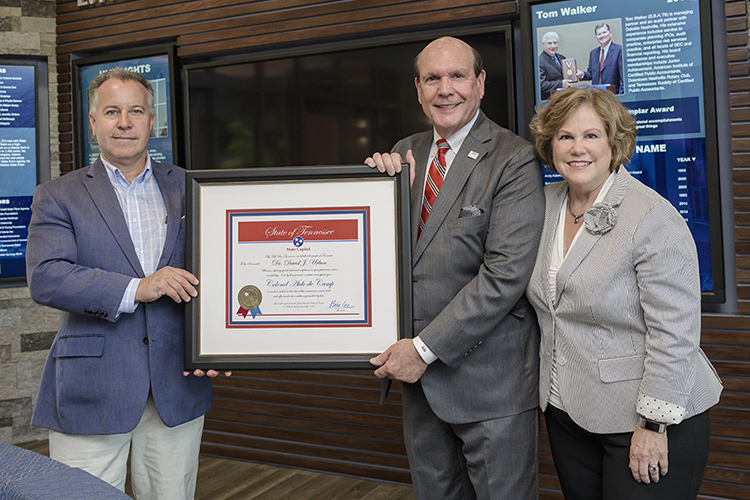 David Urban, second from right, dean of the Jennings A. Jones College of Business MTSU, is shown with a framed certificate he was presented after recently being commissioned as a “Colonel, Aide-de-Camp,” which is the highest honor granted by the governor of Tennessee. It is conferred for extraordinary service to the state. Pictured inside the Business and Aerospace Building are, state Rep. Mike Sparks, left, who nominated Urban; and Urban’s wife, Gina, right. (MTSU photo by Andy Heidt)

His background includes distinguished service as an officer in the U.S. Navy Supply Corps. As Supply Department Head aboard USS Newport (LST-1179), he managed the multimillion-dollar operating budget and services for a crew of 240 and a contingent of 500 U.S. Marines. He received the Navy Commendation Medal, the Navy Expeditionary Medal, and the Sea Service Deployment Ribbon.

He has received 31 research grants from public and private organizations, and he has published extensively in academic and professional journals. Urban has received eight national or international awards for teaching excellence. He is a certified Dale Carnegie Trainer and a member of four academic honor societies. He accepted the Dale Carnegie Global Leadership Award in 2017 in recognition of Jones College’s leadership in human relations and community development.

“Dr. Urban’s outstanding service as an educator and civic leader and his meritorious military service record distinguish him to be a worthy recipient of the prestigious Colonel Aide de Camp award. I believe Governor Lee has made an excellent choice for this award,” said state Rep. Charlie Baum, R-Murfreesboro, and an economics professor at MTSU, in the release.

As an active member of his community, Urban serves on the boards and committees of numerous organizations, including the United Way for Rutherford and Cannon Counties, the Economic Development Council for the Rutherford County Chamber of Commerce. He has served as a board member for the Rutherford County Business Education Partnership and MTSU’s Blue Raider Athletic Association. He has more than 19 years of service as a Rotarian and has twice been chosen as “Rotarian of the Year.”

“Dr. Urban’s contributions to the Murfreesboro community are countless,” said state. Sen Shane Reeves, R-Murfreesboro. “He has led the College of Business at MTSU to become a top-notch program to equip students with the necessary skills to be successful in the workforce. I appreciate his service to our country and community. I am glad we are able to recognize him with this award.” 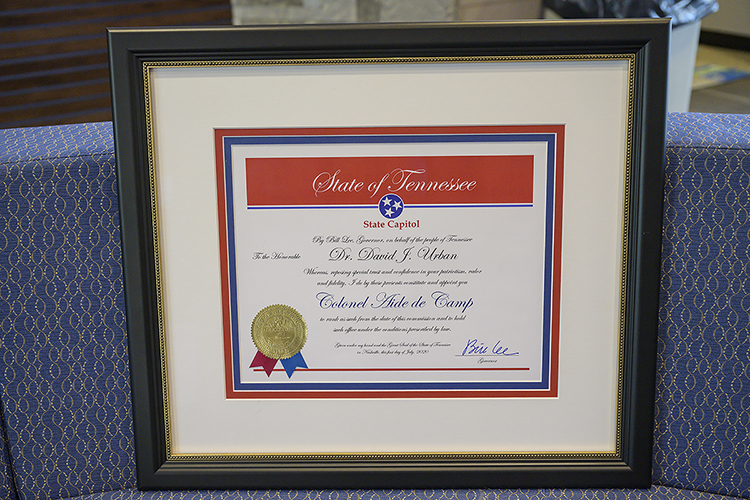 David Urban, dean of the Jennings A. Jones College of Business MTSU, received this framed certificate after he was commissioned as a “Colonel, Aide-de-Camp,” which is the highest honor granted by the governor of Tennessee. It is conferred for extraordinary service to the state.. (MTSU photo by Andy Heidt)