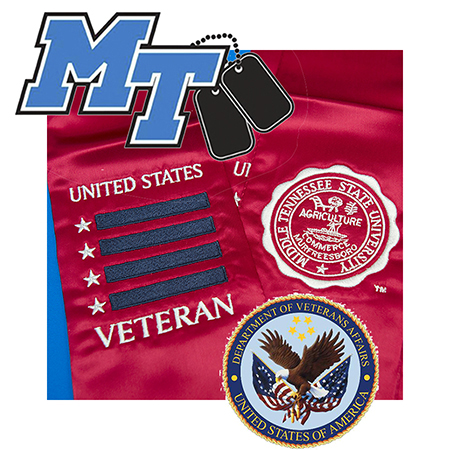 Officials with the U.S. Department of Veterans Affairs Tennessee Valley Healthcare System in Murfreesboro have presented MTSU representatives with a special commendation certificate to celebrate a national honor announced in May.

One of three national winners of the 2016 Veterans Health Administration Community Partnership Challenge, TVHS earned the award for its partnership with MTSU’s Charlie and Hazel Daniels Veterans and Military Family Center. The joint effort provides on-campus assistance to the university’s estimated 1,000 student veterans and family members.

Jené called the effort a “true partnership,” while Dr. Hilary Miller, director of the MTSU veterans center, praised the “unique relationship we have with the VA” and said the MTSU operation “is unbelievable — one of the best in the country.”

Keith M. Huber, MTSU senior adviser for veterans and leadership initiatives, called the VA-MTSU relationship “is so strategic in value.”

“Student veterans are as important as any population across our nation,” he added.

Dr. David Shulkin, undersecretary of health for the VA, first announced the award during a May teleconference with representatives from the MTSU Veterans and Military Family Center and the VA’s Alvin C. York Campus in Murfreesboro.

Dr. Hilary Miller, left, director of the Charlie and Hazel Daniels Veterans and Military Family Center at MTSU, and other university staff and York VA officials listen May 17 as Suzanne Jené, right, interim health system director of the Tennessee Valley Health System, discusses national recognition of the partnership from the U.S. Department of Veterans Affairs. (MTSU photos by Randy Weiler)

MTSU officials joined VA personnel and administrators for that announcement at the York VA campus. Along with the TVHS, winners of the 2016 Veterans Health Administration Community Partnership Challenge included:

The National Office of Geriatrics and Extended Care in the VA’s Central Office in Washington, D.C., earned an honorable mention.

The contest’s theme was “Veteran Access to Health Care Services with Special Emphasis on Replicable Partnerships.”

Huber and Miller, joined by Heather Conrad, MTSU’S VetSuccess on Campus director, represented the university at the May announcement event.

“There has been unbelievable commitment from the VA to being accessible to the veterans it cares for,” Miller said. “One of the most remarkable things about our center is the strong relationship we have with the VA.”

Jené said the MTSU-TVHS partnerships “reflects exactly the kind of involvement the VA wants to have in our communities.

“By virtue of having this center right on the MTSU campus, we are able to reach our veterans where they spend the majority of their days,” she added. “This affords them the convenience to stop by any time they have a question or concern, without having to schedule an appointment.”

Jené noted that being one of only three Department of Veterans Affairs facilities in the nation to be recognized for providing “this extraordinary level of community partnership and support, reflects upon the hard work and dedication that went into making the center a reality — from both MTSU and TVHS.”

“It also opens up a wealth of new possibilities,” she continued. “The idea of VA medical centers collaborating, sharing resources and partnering with their local communities to open more veteran centers on college campuses is a textbook definition of what the ‘MyVA’ initiative is all about.”

The Tennessee Valley Healthcare System teamed up with MTSU to provide comprehensive VA benefits and health care services to student veterans. VA staffers have offices in the veterans center, which is located inside MTSU’s Keathley University Center in the heart of the campus, and veterans can stop in anytime to see trained staff about their mental health care, education and other VA health care services and benefits.

Heather Conrad, left, Dr. Hilary Miller, Suzanne Jené and Keith M. Huber gather in a York VA Campus conference room after the May announcement of a national VA award for the Tennessee Valley Healthcare System and its community partnership with MTSU.

Miller said that Leigh Urbanavage, TVHS assistant chief of behavioral health, was a tremendous asset while serving in the veterans center until Betty Struzick, a full-time VA employee, arrived in June.

“It’s such a great feeling when I know she is in the center,” Miller said of Urbanavage. “She has the ability to help people, so I am always thankful when she’s here.”

The benefits arm of the VA also has shown unwavering support of the center, Miller said. Every week, they send staff to the center for “VA Wednesdays.”

“After just a handful of these ‘VA Wednesdays,” it was estimated that approximately $175,000 in claims were processed for the MTSU veterans,” Miller added.

“Ms. Conrad is a master’s-level counselor herself, so we are able to approach counseling needs from both the benefits and the health side of the VA,” Miller said.

“Working with veterans is complex and requires collaboration,” Miller added. “If we are to be successful, we need to leverage each other’s resources. Furthermore, the work we do is too important not to be successful. We owe this level of specialized care to our veterans. We just do.”

To learn more about the Veterans and Military Family Center, visit www.mtsu.edu/military or call 615-904-8347.