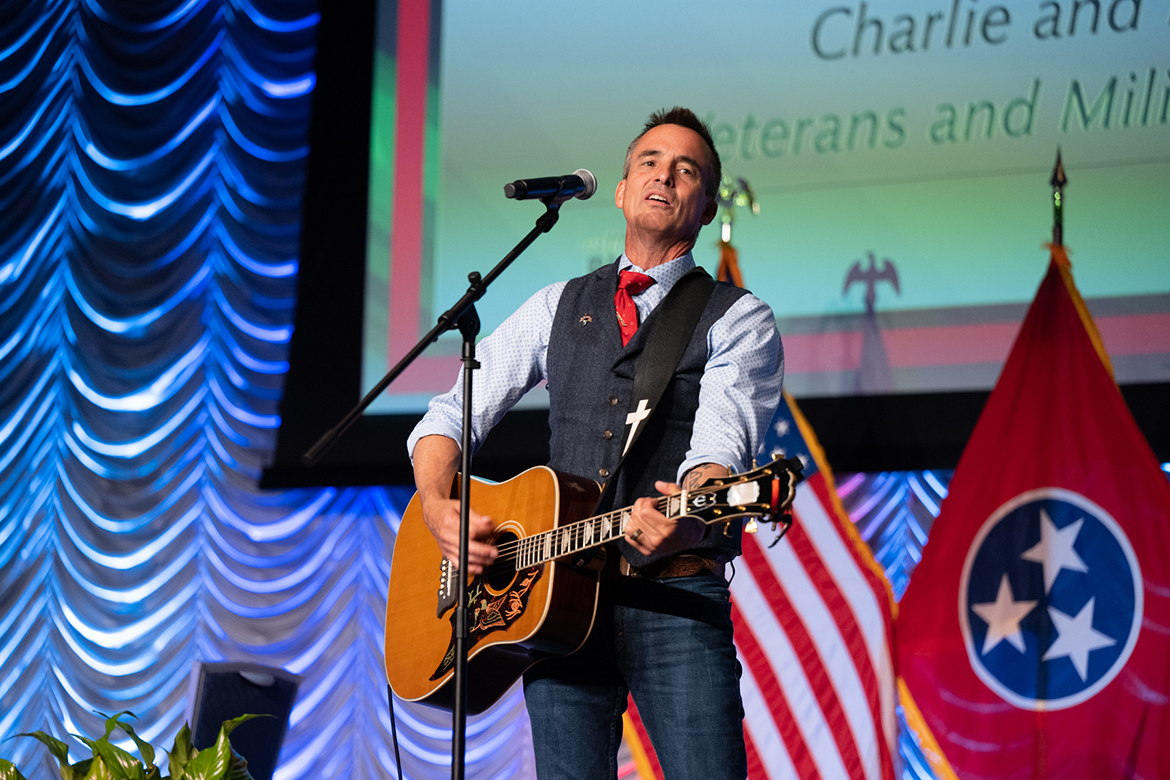 It was a night to recognize veterans, Middle Tennessee State University student veterans and their families, and MTSU’s Charlie and Hazel Daniels Veterans and Military Family Center and to present two inaugural awards.

More than 200 people gathered Aug. 25 for the university’s fifth annual Veteran Impact Celebration in the Student Union Ballroom on campus.

The event, presented by Hiller Plumbing, Heating, Cooling & Electrical and other local supporters, was billed as an intimate evening of stories and music with combat veteran Keni Thomas.

Thomas served at the 1993 battle of Mogadishu, a gruesome conflict between U.S. forces and Somali militia fighters that was immortalized in the book “Black Hawk Down” and its subsequent film.

Friends of the Daniels Center assembled to raise funds for the center and learn how it assists both the 1,000-member-plus population of student veterans and their families on campus and the veterans, service members and their families from all over the world when they contact the center’s Keathley University Center offices.

Thomas, a recipient of a Bronze Star for valor and an American Patriot Award, was part of a special 1993 U.N peacekeeping operation in Somalia. Called in to help stabilize a government toppled by civil war and outnumbered 10 to 1 by Somali militia, the 160 men of Task Force Ranger distinguished themselves in an 18-hour battle. Nineteen U.S. soldiers died and 78 were wounded.

“Any time I tell the story, it’s an honor and a bit of a responsibility,” Thomas said. “If you make it out of something where others didn’t, you’re going to spend the rest of your life thanking the guys that were on your left and on your right.”

“It is an honor and a privilege to partner with the Daniels Center to provide support and encouragement to these deserving men and women as they strive for success in the civilian sector,” Hunte said. “This is the least we can do for those who have sacrificed so much on our behalf.”

Hiller said his company has “been working hard to try and help the veterans.”

“The veterans really help us more than we help them. We just give them the opportunity,” Hiller said.

“It’s really an honor to be recognized for the good we’re doing, but, selfishly, we kind of do it for ourselves because they’re such great people, such great Americans,” he added. “We opened our door and said, ‘We’ve got an opportunity to transition them from the military to civilian life, and they’ve been great employees for us.’”

Kreulen, who retired as a U.S. Air Force colonel after 27 years, was in the Pentagon when it was attacked on 9/11 in 2001. He is now president and CEO of the Metro Nashville Airport Authority.

“It is an honor to be recognized during the Veteran Impact Celebration at MTSU. My service in the Air Force shaped my life and career in so many ways, and I’m thrilled to be recognized with this inaugural award,” Kreulen said.

“Thank you to Lt. Gen. Keith Huber and the Charlie and Hazel Daniels Veterans and Military Family Center for all you do in assisting veterans and their families.”

Huber, MTSU’s senior adviser for veterans and leadership initiatives and a retired U.S. Army lieutenant general, noted how “our veterans have served us all as they have defended our freedoms.”

“Their families have sacrificed as they provided their unconditional love and support to their service member,” he said before the event. “Our annual Veteran Impact Celebration provides an evening event to collectively celebrate and appreciate our nation, our community and our military.”

MTSU alumna Holly Thompson, award-winning morning news anchor for Nashville’s WSMV-TV, served as master of ceremonies for the event, sharing how she met her husband, Lee, at MTSU and that she comes from a family of military service.

The Journey Home Project, a not-for profit organization that assists other nonprofits in securing funds to help causes that benefit veterans of the U.S. Armed Forces, has been a financial supporter of the Daniels Center.

The Charlie and Hazel Daniels Veterans and Military Family Center, named for the late Country Music Hall of Fame member and his wife, Hazel, serves student veterans and their family members, both virtually and in person. The 3,200-square-foot suite is located on the first floor in the Keathley University Center.

The largest dedicated space for student veterans on a Tennessee higher education campus, the Daniels Center is a one-stop-shop to meet a wide range of academic, career and social needs. It is designed as a place where veterans can see other veterans, ask questions and receive the trusted assistance needed to make a successful transition to the civilian workforce.