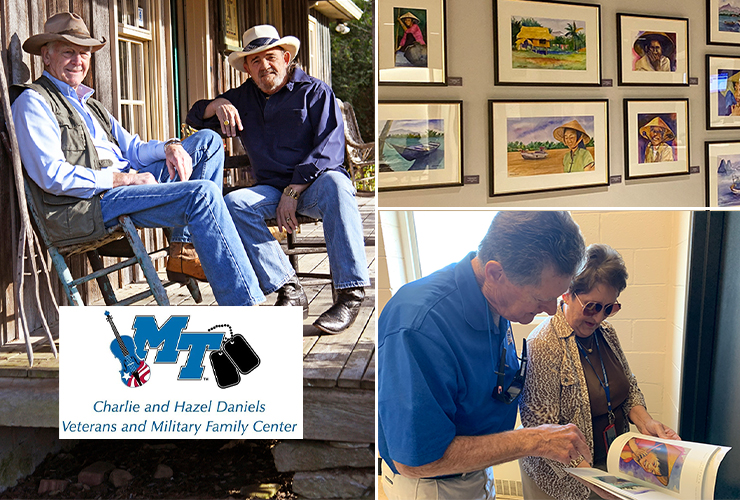 The Charlie and Hazel Daniels Veterans and Military Family Center at Middle Tennessee State University is partnering with the Monthaven Arts & Cultural Center in Hendersonville, Tennessee, to host a 60-piece art exhibit that coincides with the nation’s Veterans Day and this year’s 40th annual Salute to Veterans and Armed Forces game.

The exhibit — “Vietnam: 2 Soldiers, 2 Artists, 2 Journeys Then and Now” — officially opens Friday, Nov. 11, in the second-floor lobby of the Keathley University Center, located in the center of campus at 1524 Military Memorial Drive and continues through the end of the fall semester in early December.

It is free and open to the public and university community.

It is the story of two brave soldiers, David Wright and Chuck Creasy, both from Gallatin, Tennessee, who battled their way into the world of art, trading the tools of war for the tools of a far less deadly trade.

“Whether it’s Wright and his historically researched paintings of classic American history or Creasy’s watercolor works of subjects from the jungles of Honduras to the hidden backroads of rural Tennessee, your senses are in for a treat,” a release from the Monthaven Center, where the exhibit premiered in 2021, states.

“This memorable, one-of-a-kind exhibit features highlights of both artists’ best work from Vietnam: David, from sketches and drawings done in-country during his deployment, and Chuck, from a much-anticipated trip back to Vietnam, 50 years older and a lifetime wiser.”

“They have been lifelong friends who served in Vietnam,” Cheryl Strichik, Monthaven director, said of the artists.

An artists’ reception with Wright and Creasy will be held from 5:30 to 7 p.m. Tuesday, Nov. 22, in the KUC venue and the Daniels Center. Visitors can contact Daniels Center Director Hilary Miller at Hilary.Miller@mtsu.edu to schedule a visit, arrange for a parking pass or for more information.

Daniels and his wife, Hazel, donated $50,000 to help equip MTSU’S Veterans and Military Family Center as it prepared to open in 2015. The university named the center for the couple the following year as thanks for their lengthy support.

The veterans’ exhibit arrived at MTSU after a showing at the Virginia War Memorial Museum in Richmond and the Customs House in Clarksville, Tennessee.

The Daniels Center is the largest dedicated space for student veterans on a Tennessee higher education campus and serves more than 1,000 military-connected students on campus as a one-stop shop to meet a variety of academic needs.