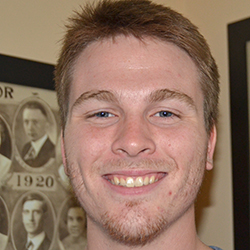 Kenneth Ball never imagined a cameo appearance in a news video would lead to having to speak in front of influential people including Tennessee Gov. Bill Haslam.

But that’s exactly what happened and led College of Basic and Applied Sciences Dean Bud Fischer to select him to represent students during the 10 a.m. Wednesday, Oct. 15, grand opening of the new Science Building on campus.

Haslam will be the featured speaker for the occasion, which includes a ribbon-cutting for the $147 million, 257,000-gross-square-foot structure that includes 13 research laboratories, 36 teaching labs and six classroom lecture halls.

Ball, chemistry professor Tammy Melton, Tennessee Board of Regents Chancellor John Morgan and state legislator Bill Ketron also will be among those who speak.

“Kenneth is an excellent student who has a strong grasp of how this building can increase student engagement and create intellectual atmosphere,” said Fischer, who was taken by Ball’s comments in a video about the Aug. 25 first-day impressions of the Science Building

Ball, 21, a senior from Savannah, Tennessee, said it “definitely is a privilege” to be the student speaker.

“I’m humbled to do it,” he said. “I know there are a lot more qualified students, but I will do the best I can.”

Ball, who said he would write his speech while at home on fall break, said he plans to touch on “the difference between the new and the old buildings,” the latter referring to the Davis Science Building and Wiser-Patten Science Hall, both of which will remain functioning facilities.

“One of the big things for me is the availability of being able to study,” Ball said. “There are open-area desks, lobby areas and rooms just for studying.”

The general science major said he hopes to graduate in 2016. Nearly all of the classes in his major have been completed.

His minor in secondary education and two student teaching residencies are what is extending his MTSU time. He plans to be a secondary school teacher after graduating.