‘MTSU On the Record’ returns to Vietnam

‘MTSU On the Record’ returns to Vietnam 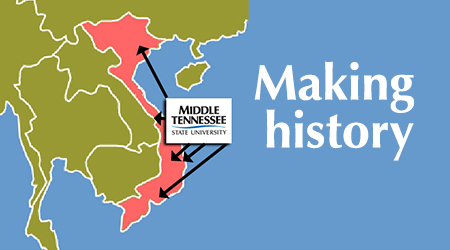 A pioneering study-abroad experience in Vietnam was the focus of a recent edition of “MTSU On the Record.”

Courtney Schaaf enjoys a refreshing drink of coconut milk during a boat ride on the Mekong River in Vietnam. (MTSU photos by GIna Logue)

Host Gina Logue’s interview with Dr. Derek Frisby, associate professor of history, and student Courtney Schaaf aired on WMOT-FM (89.5 and www.wmot.org). You can listen to the program here.

Frisby and the students from his “Public Memory and the Vietnam War” class explored the culture, politics and history of the nation formerly known as part of French Indochina March 10-24.

Their sojourn took them from to the claustrophobic tunnels where civilians hid during the Vietnam War to the top of a hill where the First Reconnaissance Battalion was encamped during the conflict.

They also viewed some of the pivotal battle sites of the war, including Khe Sanh and Hue, and entered the infamous “Hanoi Hilton” building that housed prisoners of war.

Dr. Derek Frisby of MTSU makes friends with a local reptile during the inaugural study-abroad trip to Vietnam with his class in March.

In addition, the students toured a coconut candy factory, a silk factory and a rice paper-making operation.