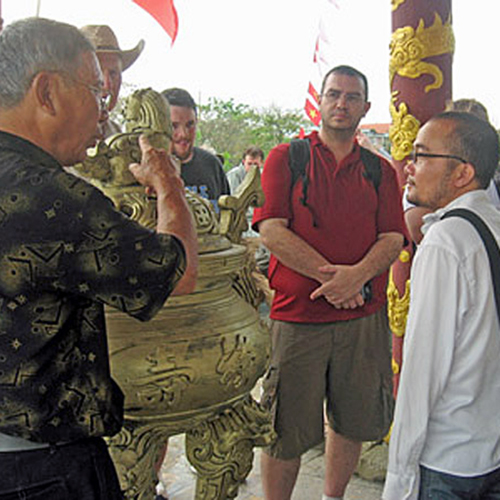 For the second time in two years, MTSU study-abroad students are venturing to Vietnam for a closer look at a complex and fascinating country in Southeast Asia.

While last year’s excursion was a more general examination of the country, Frisby said this year’s learning experience will hone in more on the Vietnam War itself.

“On this trip, we’re going to focus a lot more on the demilitarized zone,” said Frisby, a faculty coordinator with a joint appointment to the College of Liberal Arts and the Office of International Affairs. “We’re going to do some more in-depth studies of the battle for Hue City as well as the battle for Khe Sanh.

“And, thanks to all the resources and the experience we gained last year, we have a much better idea of where our MTSU casualties were located, and we’ll be able to hit a number of those sites this time as well.”

Those MTSU casualties include James T. Luscinski, who died in Quang Tri province on Oct. 8, 1969, when his helicopter crashed during a rescue support mission, and Kenneth Lee Kirkes, who was killed by small arms fire in Quang Nam on Feb. 9, 1968.

Both Luscinski and Kirkes are among the members of the MTSU community whose names are engraved on the university’s Veterans Memorial wall in front of the Tom Jackson Building.

While students will stay in mostly urban hotels, part of this year’s class will venture out from Hue City to the Laotian border for four or five days to the site of the Battle of Hamburger Hill, where American and South Vietnamese forces fought North Vietnamese forces May 10-20, 1969.

Frisby said students will interpret the battle of Hue City by putting together a theoretical plan for establishing informational markers at key sites. Each student will be assigned a particular aspect of the battle for a virtual interpretive plan that will be posted online.

The students also will walk the trail taken by the so-called “ghost patrol,” a group of two U.S. Marine squads that departed from their base at Khe Sanh on Feb. 25, 1968, only to be caught in an ambush as they entered a tree line outside the base. Seventeen Marines were killed and 10 more perished in a March 30 attempt to recover the bodies of the dead.

Frisby said he believes this year’s students, like their predecessors in 2013, will come to understand a less demonized view of the Vietnamese people than was perpetrated during the war.

“I think our students came back with a sense that these Vietnamese people are very resilient,” Frisby said. “They have an entrepreneurial spirit today. That’s for sure. And we were just able to sort of humanize the Vietnamese in ways I don’t think that past interpretations of the Vietnam War have been able to do.”

For more information, contact Frisby at derek.frisby@mtsu.edu or go to http://tinyurl.com/oppq7xh. You also can read a blog from last year’s trip, including photos and videos, at http://mtsunews.com/vietnam-visit-2013.