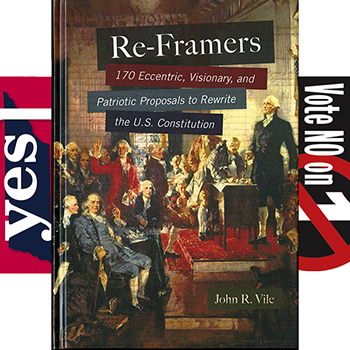 Unsuccessful attempts to amend the U.S. Constitution were in the spotlight in a recent edition of the “MTSU On the Record” radio program.

Host Gina Logue’s interview with Dr. John Vile, dean of the University Honors College and constitutional law scholar, first aired Nov. 10 on WMOT-FM (89.5 and www.wmot.org ). You can listen to their conversation here.

Vile is the author of “Re-Framers: 170 Eccentric, Visionary and Patriotic Proposals to Rewrite the U.S. Constitution.”

The book includes amendments that focus on specific rights and liberties, as well as more comprehensive libertarian, socialist, parliamentary and even monarchical plans.

Some proposed amendments are more amusing. One amendment would have prohibited the government from stopping marijuana sales and usage. Another would have extended voting rights to all 18-year-old citizens other than “idiots and the insane.” The definition of the word “idiots” in this context is subject to interpretation.

“To me, they are alternative paths that could have been taken — some fairly consequential, others often seemingly fairly trite and occasionally even misanthropic,” Vile said.

The conversation comes in the wake of the recent statewide vote during the 2014 midterm elections on four legislatively referred amendments to the Tennessee state constitution. Voters approved potential revisions to abortion law, state judicial elections, income taxes and gambling, which the Tennessee State Legislature could take up in its upcoming session in January.

A video clip of the interview can be viewed below.