MTSU Out of the Blue: January ..

Immigration’s role in American history is focus of... 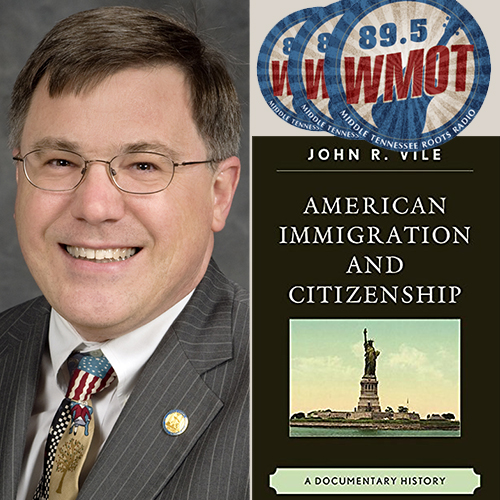 The impact of immigration in shaping the American experience is the topic of the next “MTSU On the Record” radio program.

Vile is the editor of “American Immigration and Citizenship: A Documentary History.” In this book, using a mixture of statutes, constitutional provisions, speeches, judicial decisions and interpretive essays, Vile traces changes in immigration policy over the years.

In the interview, Vile also comments on contemporary attitudes toward immigration stemming from current political controversies such as “sanctuary cities,” where mayors have refused to prosecute undocumented immigrants solely for violating federal immigration laws.

“For all practical purposes, the national government does set immigration policy,” said Vile, “but once they’re here, that does present a little bit different issue, and I think it will be sort of one of the flashpoints that we’ll just have to watch for and see how it’s resolved.”

The fall 2016 Honors College Lecture Series, which focused on “Citizenship, Refugees and Immigration,” featured Vile as one of the presenting scholars.

This circa 1905 photo of the Statue of Liberty in New York Harbor, created by the Detroit Photographic Co. and the focus of countless immigrants’ hopes since it opened in October 1886, is part of the Library of Congress Prints and Photographs Division and is featured on the cover of MTSU political scientist John Vile’s book “American Immigration and Citizenship: A Documentary History.” (photo courtesy of the Library of Congress)