‘MTSU On the Record’ gets insider’s view of consti...

‘MTSU On the Record’ gets insider’s view of constitution framers 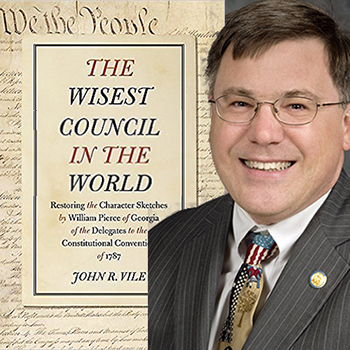 The personal and professional impressions of a little-known participant in the U.S. Constitutional Convention was the subject of analysis on a recent edition of the “MTSU On the Record” program.

Host Gina Logue’s interview with John Vile, constitutional law expert and dean of the University Honors College, first aired Dec. 21 on WMOT-FM (89.5 and www.wmot.org ). You can listen to their conversation below.

Vile is the author of “The Wisest Council in the World,” a compilation of character sketches of convention delegates by one of their peers, William Pierce of Georgia.

While contributing relatively little to the Constitution’s creation in 1787, Pierce’s comments about his colleagues, sometimes revelatory and sometimes snarky, provide unique insights into a pivotal event in American history.

For example, Pierce praised James Madison of Virginia, the so-called “Father of the Constitution,” by writing, “From a spirit of industry and application which he possesses in a most eminent degree, he always comes forward the best informed man of any point in debate.”

On the other hand, Pierce described James McHenry of Maryland as “a man of specious talents with nothing of genius to improve them.”

Of Alexander Hamilton of New York, who later became the first secretary of the treasury, Pierce wrote, “His manners are tinctured with stiffness and sometimes with a degree of vanity that is highly disagreeable.”

“There’s every indication through the literary allusions that he uses that he was classically educated, and part of classical education … often involved much more florid speaking than we’re accustomed to today,” said Vile.