MTSU is No. 1 in the state in transfer students and is the top institution using the reverse transfer process. Vol State is one of MTSU’s top transfer feeder schools. 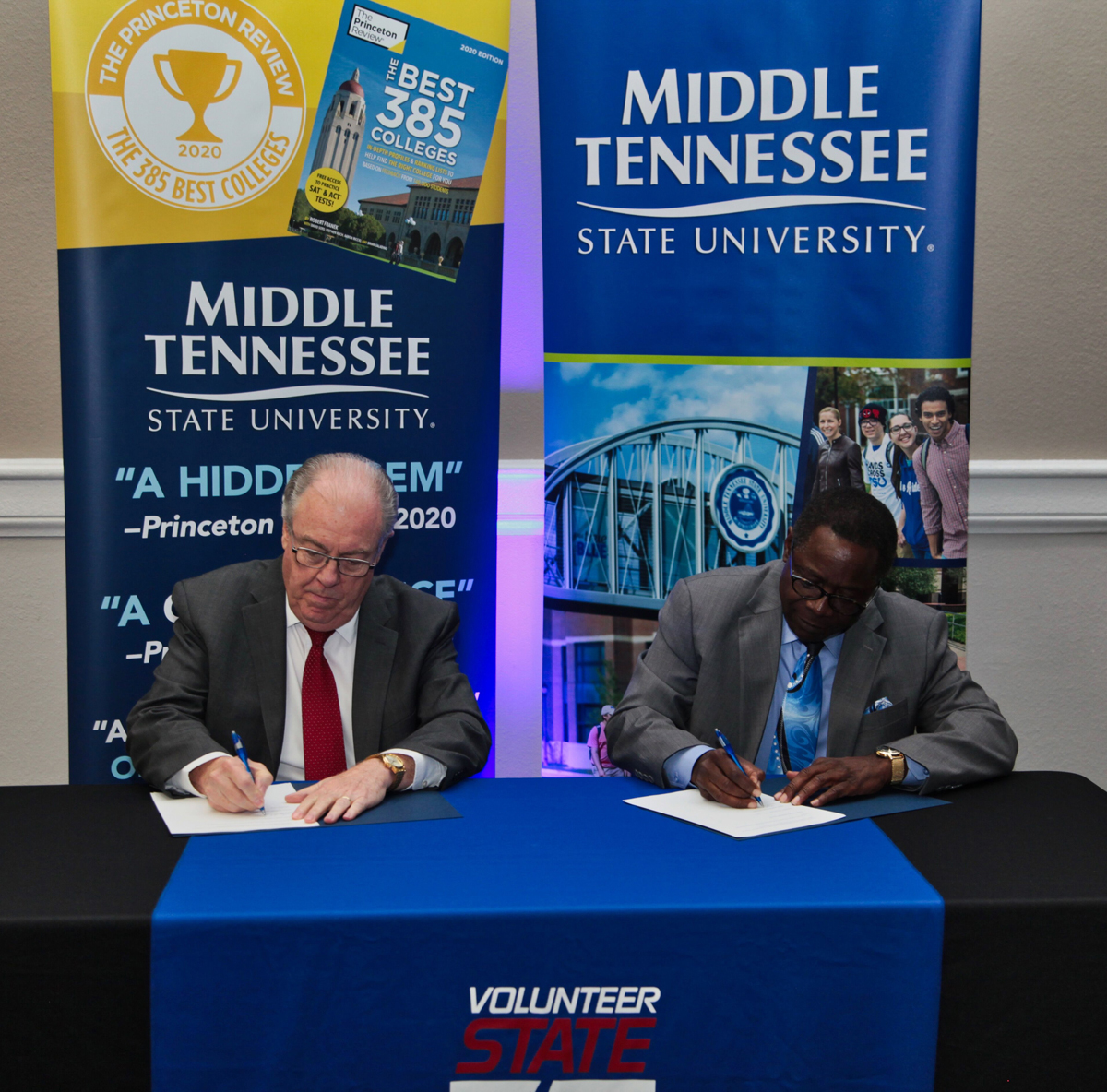 Presidents Jerry Faulkner, left, of Volunteer State Community College and Sidney A. McPhee of Middle Tennessee State University sign an agreement marking the “MTSU Promise” to Vol State, the sixth such pathway established for students with associate degrees to move seamlessly to the four-year university. The signing occurred Oct. 22 at the Millennium Maxwell House Hotel in Nashville during MTSU’s True Blue Tour visit to recruit students and court counselor and community college staff in Nashville. (MTSU photo by David Foster)

Vol State, with a main campus is in Gallatin, Tennessee, three satellite campuses and an online e-Campus, is the sixth community college to join the MTSU Promise program. In it, the university pledges support to help students at partner schools complete an associate degree, then move forward in seeking a four-year degree.

“This is an opportunity to further develop and fortify our relationship with a great community college and partner,” McPhee said. “This agreement will assist Vol State students and ours, too. They can transfer and concentrate on their education by having all the hurdles out of the way.”

Faulkner said that in higher education “we currently talk a lot about pathways, but it must be more than talk. We must intentionally design and implement pathways that lead students to the achievement of their goals. This agreement with MTSU provides another novel pathway for students to fulfill their dreams.”

“We are excited to partner with MTSU and are eagerly anticipating the possibility of helping students begin and complete this new pathway,” Faulkner added.

The agreement calls for Vol State to share directory information of its students with MTSU to include them in tailored communications of emails and hard-copy mailings to support their planning for a bachelor’s degree after they successfully complete an associate degree.

The agreement also says Vol State students participating in the MTSU Promise will sign a “reverse transfer” agreement. That means if a student fails to complete an associate degrees before transferring to MTSU, he or she will automatically receive the associate degree from Vol State once sufficient credits have been completed at MTSU.

Through its existing Guaranteed Transfer Scholarship Program, MTSU will provide aid of $3,000 per year for two years, or a maximum of four semesters, for Vol State students who transfer to MTSU and achieve a 3.0 GPA.

Students transferring to MTSU will not be eligible to apply to receive the Guaranteed Transfer Scholarship until after they complete 45 credit hours at Vol State. 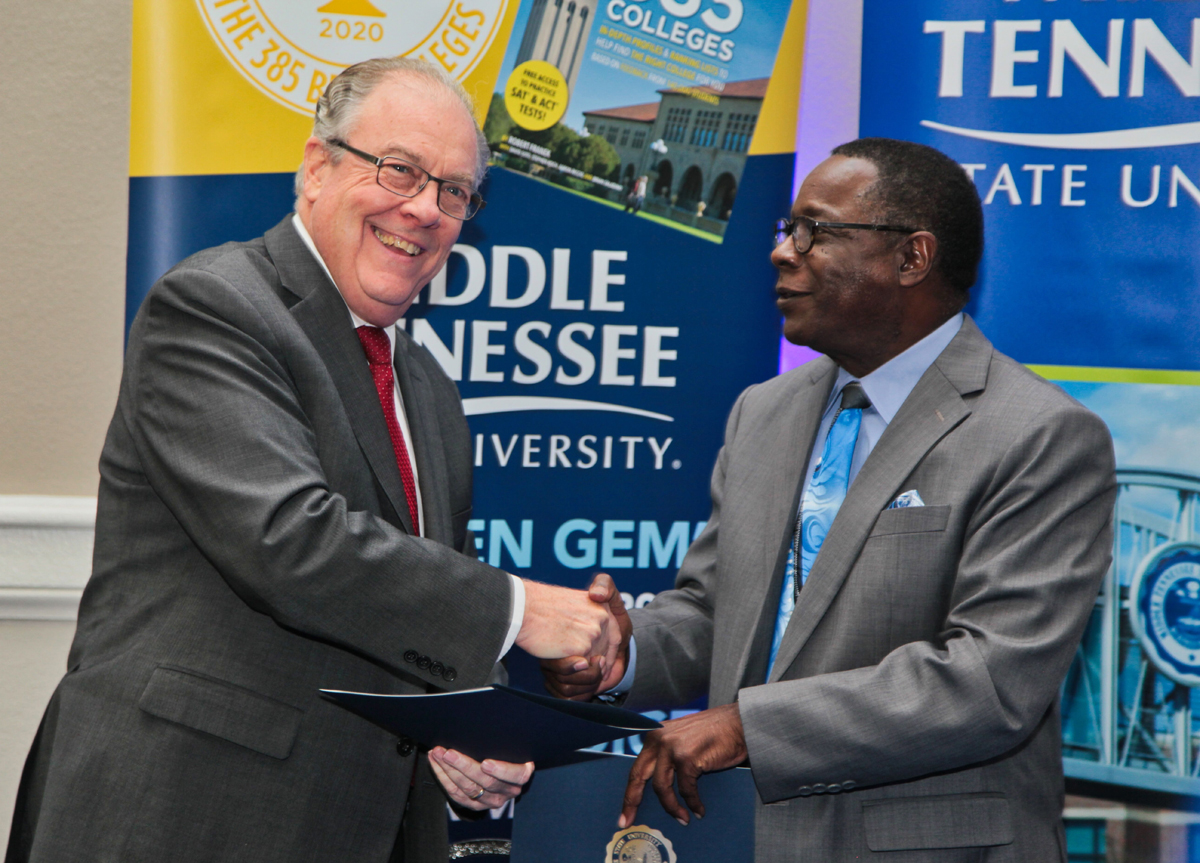 MTSU President Sidney A. McPhee, right, and Volunteer State Community College President Jerry Faulkner shake hands after signing an “MTSU Promise” to ease the transition for Vol State students from college to university Oct. 22 at the Millennium Maxwell House Hotel in Nashville. Through its existing Guaranteed Transfer Scholarship Program, MTSU will provide $3,000 per year for two years, or a maximum of four semesters, for qualifying Vol State students who transfer to MTSU and achieve a 3.0 GPA. (MTSU photo by David Foster)

Dr. Deb Sells, MTSU’s vice president for student affairs and vice provost for enrollment and academic services, said the MTSU Promise is a program that allows Vol State and other community college students to consider their bachelor’s degree as they begin working on an associate degree.

“They can be successful at their community college and then successfully complete their bachelor’s degree,” she said.

Sells said the application deadline for transfer students each year is Feb. 15, which means the majority of participating Vol State students will have completed 60 credits before they transfer.

MTSU will also guarantee students who complete 60 credits with a 3.0 GPA at Vol State that they’ll be admitted to MTSU and receive a scholarship for their last two years of study, Sells said.

Other MTSU administrators and academic staff attended the signing, which followed the True Blue Tour luncheon.

Vol State’s other campuses are in Livingston, Highland Crest in Springfield and at the Cookeville Higher Education Center. To learn more, visit www.volstate.edu.