Last day to vote for Blue Raiders for ‘Best Upset’... 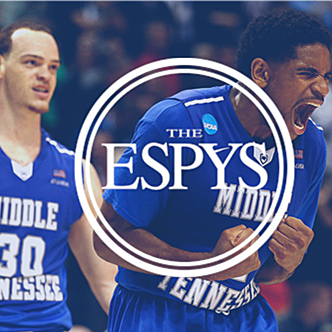 MTSU basketball fans still have times to cast their votes for the Blue Raider men’s team to win the “Best Upset” category in this year’s ESPY Awards.

The Blue Raiders made history in March when they became just the eighth No. 15 seed to defeat a No. 2 seed in the NCAA Tournament, upending No. 2 ranked Michigan State Spartans in the opening round, 90-81, on March 18.

The ESPYs take place at 7 p.m. CT Wednesday, July 13, and will be televised on ABC. Fan voting for each category can be found at ESPYs.com and is open until the beginning of the awards show.

Murfreesboro mayor and MTSU alumnus Shane McFarland is doing his part to encourage Middle Tennessee to vote for the Blue Raiders.

“As a mayor and Blue Raider alumnus, I couldn’t be more excited about supporting MT Basketball in national recognition for the team’s upset against Michigan State in the NCAA tournament earlier this year,” McFarland said in a city news release. “Now we have the opportunity to show our appreciation by voting the amazing game as the ‘Best Upset’ in this year’s ESPY Awards. I encourage all MT fans to go online and vote.”