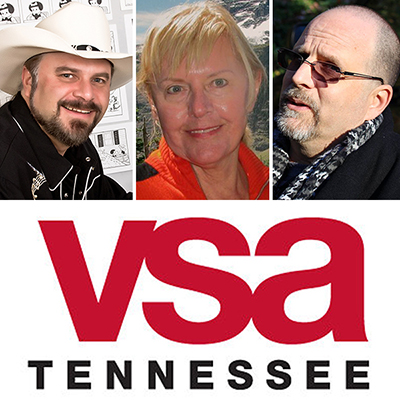 Organizers of a lecture series welcoming three renowned artists to the MTSU campus this spring have announced a scheduling change for one of the guests.

Actor/author/teacher Estelle Condra had been scheduled to visit MTSU Feb. 20, will now perform a play and discuss creating live performances as an artist with a disability during her rescheduled Friday, March 6, lecture in the Keathley University Center Theater.

Condras’s free public lecture is set for 12:40 to 1:40 p.m. A searchable campus map of MTSU, complete with parking details, is available at http://tinyurl.com/MTSUParking14-15.

Guy Gilchrist, co-creator of “Muppet Babies” and cartoonist for the classic comic strip “Nancy” since 1995, discussed using the arts to address social issues during his Feb. 13 lecture in MTSU’s College of Education Building.

The trio’s visits are being presented by VSA Tennessee, the state organization on arts and disability that was established in 2001 on the MTSU campus.

VSA, an international organization on arts and disabilities, is observing its 40th anniversary in 2014-15. Founded in 1974 by Ambassador Jean Kennedy Smith and formerly known as Very Special Arts, VSA merged with the John F. Kennedy Center for the Performing Arts in 2011 to expand its services.

Gilchrist, a resident of Gallatin, Tennessee, took over the “Nancy” strip after the death of creator Ernie Bushmiller and immediately put his own stamp on it by incorporating the names of musical performers, athletic teams, universities and special events into background items, T-shirts and the like. He even included “MTSU Blue Raiders” on a T- shirt worn by the character “Aunt Fritzi” in October 2013.

Gilchrist, whose work is part of a permanent collection at the Smithsonian Institution, lectured on cartooning and taught audience member to create a cartoon during his MTSU visit. His credits also include drawing the “Jim Henson’s Muppets” comic strip as well as cartoons for “Looney Tunes,” “Bugs Bunny,” “Tom & Jerry,” “The Pink Panther” and “Fraggle Rock.”

You can watch a video of Gilchrist’s “Using Your Gifts” inspirational talk below.

Condra was among the first artists VSA Tennessee brought to visit MTSU and has returned to campus several times to share her work and lecture on the importance of the arts. A native of South Africa who now lives in Tennessee, she worked internationally in theater for many years until retinitis pigmentosa began taking her sight.

You can watch an excerpt of Condra’s performance in “Vibrations of Laughter” below.

Stagner, a Chattanooga native, has worked with artists ranging from Blueground Undergrass to Derek Bailey to the Rev. Howard Finster. He and Dennis Palmer co-founded the free improvisation duo the Shaking Ray Levis and the Shaking Ray Levi Society, an arts education organization that supports emerging artists in performance, art and film.

Stagner, who also works with The Rhythmic Arts Project, founded by drummer Eddie Tuduri, to present music workshops for people with physical and mental disabilities, will use his Feb. 27 MTSU visit to discuss how percussion can help young people.

You can watch a video of the Shaking Ray Levis performing with MTSU alumnus and fellow artist Wayne White below.

For more information about VSA Tennessee, visit its website at http://vsatn.org.