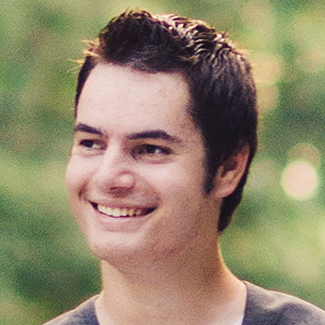 George Dennehy offers many messages in his music — love, gratitude, determination, acceptance, faithfulness — but the one that seems to permeate the young singer-songwriter’s conversation is joy.

If he’s not chuckling at a tale he’s about to tell, he’s leaping up to demonstrate an unexpected challenge to his audience.

“I really wanna see you guys try to write your name with one of your feet. You don’t have to participate, but if you wanna be my friend …” the Virginia resident said with a wide grin Wednesday at MTSU during a special master class and Q-and-A session before the annual VSA Tennessee Young Soloist competition.

Several in the audience of about 50 students complied with Dennehy’s request, pulling off socks and shoes and clutching pens with chilled toes to scrawl across scraps of paper. Dennehy inspected the attempts, praising the writers for their efforts.

“You guys practice, and when I come back, we’ll start a footwriting club here on campus,” he joked. Dennehy then whipped off his soft driving moccasins and demonstrated how he’s used a pencil since he learned to write as a young child.

Dennehy, who was born without arms, was a featured performer at the Young Soloist event in MTSU’s Wright Music Building, which included eight talented young Tennessee musicians aiming for a national contest in June in Washington, D.C.

An internationally recognized musician and inspirational speaker, Dennehy is matter-of-fact about the challenges he faces every day, as well as the accomplishments.

An American family adopted Dennehy at 18 months old from a Romanian orphanage. He learned to play the cello by age 8 and advanced in classical music until he was performing with regional orchestras. Dennehy also taught himself guitar, electric bass and basic piano — all played with his feet — to be “normal, to try to fit in.”

George Dennehy, left, a Virginia-based musician and inspirational speaker, talks with a group of MTSU students Wednesday during a special master class in the College of Education Building. Dennehy performed with the 2012 VSA Tennessee Young Vocalist contestants later that night in the Wright Music Building. (MTSU photos by Darby Campbell)

A homemade YouTube video of Dennehy’s acoustic version of the Goo Goo Dolls’ “Iris” catapulted him into Internet fame, leading to a live performance of the song with the band at Musikfest 2012 in Bethlehem, Pa. (You can see a portion of that performance in the PBS story about Dennehy at the end of this article.)

He performed an acoustic cover of Howie Day’s “Collide” for his afternoon MTSU audience, demonstrating the style that’s making him a successful career as both a musician and speaker advocating for adoption and disability awareness.

The self-described “goofball” explained that while his family has supported all his efforts, he became deeply depressed in high school after years of bullying and frustration over his physical differences.

Now 20 and joyfully married with a baby on the way, Dennehy recalled a point when he seriously contemplated suicide, “wrote a note and everything,” and then experienced an abrupt emotional transformation that led him to realize that he had work to do on earth.

George Dennehy warms up on the guitar before speaking to a group of MTSU students Wednesday during a special master class in the College of Education Building.

“I’m a strong believer that no one is here by accident,” he said. “I believe that every dream, no matter how big or how small or how totally crazy, is possible to achieve. I believe we’re all here for our dreams. And we’re all here to help each other out. We’re here to do something bigger than ourselves.”

Helping out at the VSA competition was the role of MTSU professor Lori Kissinger’s Organizational Communication in Communities EXL Class, which handled logistics for this year’s event as they did the 2013 concert.

Nashvillian Kristen Wright is the 2014 VSA Tennessee Young Soloist winner, and Logan Blade of Columbia, Tenn., is the runner-up.

Each state’s Young Soloist winner receives a small monetary award, a plaque and performance opportunities. Recordings of performances by the top two state winners are submitted to the national VSA Young Soloist Competition. Winners at the national level receive $5,000 scholarships and the opportunity to perform at the John F. Kennedy Center for the Performing Arts in Washington, D.C.