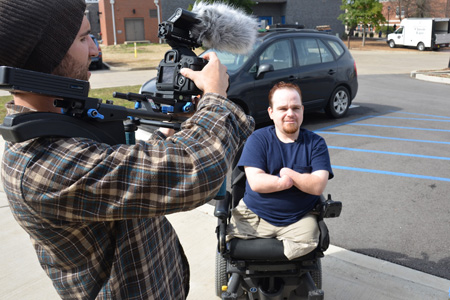 Visit the Wal-Mart store on Old Fort Parkway in Murfreesboro and you may run into the affable customer service manager tooling around in his motorized wheelchair, working like all of the other employees of the perpetually busy big-box retailer.

MTSU student Charlie Rogers, center, was filmed on campus in February by a filming crew hired by Wal-Mart. The crew produced a company video spotlighting Rogers, an economics major who works in the customer service department at the retailer’s store on Old Fort Parkway in Murfreesboro. (MTSU photo by News and Media Relations)

The 27-year-old Murfreesboro resident contracted meningitis at age 5, forcing doctors to amputate his limbs at the wrists and just above the knees. Refusing to give up, Rogers faced the challenge and is moving toward a bright future.

“I just have to figure out a different way of doing things, and that’s mostly with everything in my life,” he said. “It’s hard to put into words.”

Rogers drives a 2005 Chevrolet Uplander minivan, which is specially equipped with controls that enable him to operate the steering with one arm and the gas and brake with the other arm.

At Wal-Mart, where he’s worked the past five years, Rogers started out as a greeter. He quickly grew bored with that role and worked his way up to a cashier’s spot.

A filming crew from the Wal-Mart Stores’ corporate headquarters in Arkansas visited Murfreesboro in February to capture footage of Rogers in his work environment as well as on the MTSU campus, where he’s been taking classes since 2005. You can watch that video at http://youtu.be/UFDwjkL5eFo.

An admitted technology junkie, Rogers said he uses his computer “a lot” to complete class assignments, though he does write with a pen or pencil on occasion.

“I’m a lot faster at typing than I am writing,” he said.

This video screenshot shows MTSU student and Wal-Mart associate Charlie Rogers talking to a store manager inside the Old Fort Parkway store. Click on the image to watch Wal-Mart’s video spotlighting Rogers, a customer service manager for the big-box retailer.

“Charlie is a diligent, very responsible student, and it is a joy to teach him,” Abernathy said. “He is extremely courteous and has an outgoing personality.”

Rogers plans to take a class this summer before finishing up his degree requirements in the fall and spring to graduate in May 2014. He hopes his MTSU degree opens up more opportunities for him within Wal-Mart, whether in Murfreesboro or elsewhere.

“As both a student and Wal-Mart employee, he makes the most of his abilities and gifts,” she said. “In my view, he’s a hero and an inspiration. I am delighted that Wal-Mart honored him through the video.”