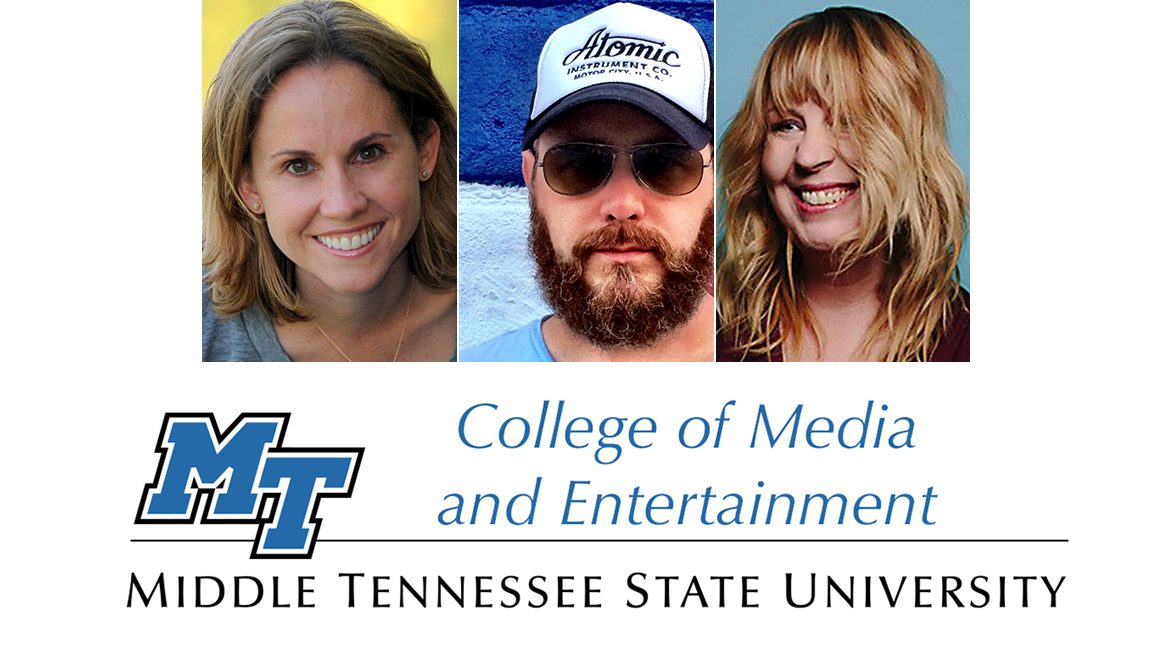 A trio of acclaimed alumni are now part of the Wall of Fame in MTSU’s College of Media and Entertainment: filmmaker Christin Baker, music producer-engineer F. Reid Shippen and entertainment manager/publicist Traci Thomas.

The three join the 82 media leaders already included on the list, which is featured inside the university’s Bragg Media and Entertainment Building in a display of member photos expanded in 2015 to encompass an interactive digital sign.

She founded and is chief executive officer of the Los Angeles, California-based digital distribution company, tellofilms.com, a multiplatform subscription service for web series focusing on lesbian issues. In addition to serving as executive producer and distributor of “Nikki & Nora, the first unaired network pilot to be re-imagined as a digital series, Baker brought home the “Best Director” prize from the 2016 Raindance Film Festival’s Web Fest Awards for tello’s original series “Maybelle.” A member of the Producers Guild of America and the Television Academy of Motion Picture Arts and Sciences, Baker directs the new sci-fi series “Riley Parra,” which premieres July 15, and has two feature scripts in the development process.

Shippen, a 1994 MTSU graduate with a Bachelor of Science in recording industry management, is a mixer, producer and engineer as well as an entrepreneur, consultant and business owner with interests including real estate, media and public relations, publishing, investment and manufacturing. His engineering and producing credits include a wide range of artists such as Ingrid Michaelson, India.Arie, Sam Hunt, Cage the Elephant, Kenny Chesney, Gloria Gaynor, Eric Church, Steven Tyler, Kelsea Ballerini, MercyMe and One Republic.

His mixing work on seven albums ranging from CeCe Winans’ self-titled 2001 release to Jonny Lang’s 2006 “Turn Around” to Chris Tomlin’s “And If Our God Is for Us …” 2010 collection has so far earned Shippen seven different Grammy Awards. He’s served as co-chair of the National Academy of Recording Arts and Sciences’ Producers & Engineers Wing and owns and mixes projects at Robot Lemon, a Nashville private studio with a unique and highly customized hybrid analog/digital studio setup. Shippen also produces, records and is actively involved in artist development.

A co-founder of the Americana Music Association, Thomas was recently honored by the Country Music Hall of Fame and Museum at its 10th annual Louise Scruggs Memorial Forum for “forg[ing] a career by elevating tradition-rich roots music-makers to popular acclaim.” The honor pays homage to pioneering agent-manager Louise Scruggs, wife and savvy business partner of Hall of Fame member Earl Scruggs.

The MTSU College of Media and Entertainment Wall of Fame began in 2000 as a way to honor successful mass-communication graduates and inspire current students to continue working toward their goals. Each of the college’s three departments submits an honoree for consideration each year, and the Wall of Fame ceremony then becomes a part of the college’s annual awards day for students in the School of Journalism, Department of Recording Industry and Department of Electronic Media Communication with scholarships and other honors.

One of the largest communication programs in the nation, the MTSU College of Media and Entertainment offers degree concentrations in 14 major areas — ranging from journalism to digital media and media management to recording industry management — and is accredited by the Association for Education in Journalism and Mass Communication.