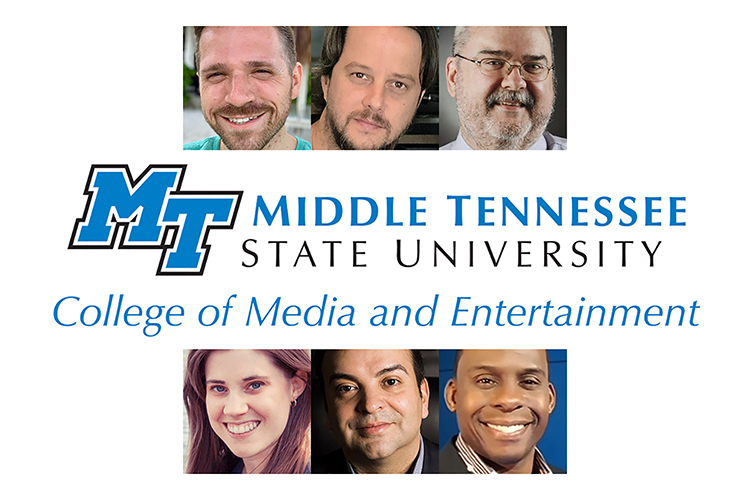 Six acclaimed alumni are now part of the Wall of Fame in Middle Tennessee State University’s College of Media and Entertainment following a virtual event that saluted two years’ worth of honorees alongside a slate of student award winners.

The 2020-21 Wall of Fame members are Patrick Eaton, a 2009 graduate of the college’s then-Radio and TV Production Program, now the Department of Media Arts; Lee Foster, a 2002 alumnus of the Department of Recording Industry; and John L. Pitts, a 1978 graduate of what’s now the School of Journalism and Strategic Media.

The college also formally recognized three 2019-20 honorees during this spring’s event after the pandemic forced the cancellation of the 2020 ceremony.

They are Laura Cruz, a 2011 radio and TV production alumna included in the Media Arts group; Mike Molinar, a 1998 School of Music graduate with a recording industry minor; and Larry Ridley, a 2000 electronic media journalism alumnus added to the School of Journalism roster.

The six new honorees bring the College of Media and Entertainment’s Wall of Fame membership to 98.

Launched in 2000 to recognize outstanding alumni and community leaders from each of the college’s specialties and inspire current students to continue working toward their goals, the Wall of Fame is featured inside the university’s Bragg Media and Entertainment Building in an interactive digital display — the university’s first developed by students.

Its membership includes many MTSU alumni nationally recognized in their fields. A searchable online version of the wall is available at https://mtsu.edu/media-wall-of-fame.

The college celebrated the Wall of Fame and its annual student awards in a live ceremony broadcast from the university’s Chris Young Cafe, held shortly before spring 2021 classes ended.

Students from the college produced the nearly hourlong event, which is available to watch here.

Eaton, a senior technical project manager for film and television at Fuse Technical Group who joined the company in 2019, currently specializes in extended reality, known as XR, and virtual production for film environments.

He worked with the VER entertainment company, now known as PRG Gear, from 2013 to 2018 as a senior project manager with the concert touring division, where he developed new products alongside artists and creative teams for touring and innovative video systems deployment.

Among his touring and TV credits are work with Josh Turner, Women of Faith, Rascal Flatts, twenty one pilots, Shania Twain, Imagine Dragons, Britney Spears, Jennifer Lopez and Gwen Stefani as well as the MTV and VMA Movie Awards, Grammy performances and a variety of live TV special events.

Foster, the owner and curator of Electric Lady Studios, rehabilitated the renowned musical home of the legendary Jimi Hendrix and has worked on projects there with artists that include Adele, Frank Ocean, Patti Smith, Lorde, St. Vincent, Kendrick Lamar, Thom Yorke and the late David Bowie.

Foster also is creator and producer for the Live at Electric Lady concert series and produced the documentary “Live at Electric Lady: The Raconteurs” and the short film “Honey I Sure Miss You: A Tribute to the Art, Life, and Music of Daniel Johnston.” He is curator and director of art sales for the Johnston estate, developing educational and charitable programs for mental health awareness to honor the Austin, Texas, musician and artist.

Pitts, sports editor for the Northeast Mississippi Daily Journal in Tupelo since 2006, has covered five Olympic Games and a variety of other national and international sports events.

In 1996, Pitts was working as night manager at the Main Press Center at the Atlanta Olympics when the Centennial Park bomb exploded nearby. He helped with the treatment of several injured people and with conducting the late-night news conference where organizers announced that the Summer Games would continue. He joined the Decatur (Alabama) Daily in 1999, worked at the Tupelo paper 2001-04 and spent a year at the Times Daily in Florence, Alabama, before returning to Tupelo.

2020 honoree Cruz works in the film and TV industry as a script supervisor, most recently on the ABC network limited series “Women of the Movement,” set to air during the 2021-22 season, and the Starz series “Hightown.”

Her credits also include script supervision for 81 episodes of the ABC/CMT series “Nashville” between 2014 and 2018 and the 2018-20 CBS All Access thriller anthology series “Tell Me a Story” that also aired on The CW’s Nashville affiliate, WNAB.

Molinar is the general manager for Big Machine Music, which has been in the top 10 of Billboard’s best music publishing and country publishing lists since 2017.

He was elected in 2019 to the boards of the National Music Publishers Association, the trade association for the American publishing industry, and the Mechanical Licensing Collective, the nonprofit organization created by the U.S. Copyright Office as part of the historic Music Modernization Act of 2018.

He’s also a board member for Music Health Alliance, a nonprofit that helps music professionals find medical and financial healthcare solutions, and for the Country Music Hall of Fame Education Council. His previous roles include working with Reba McEntire’s original Starstruck Writers Group and Cal IV Entertainment as well as his own startup businesses, including Effusion Entertainment.

Ridley has been a sportscaster and anchor for SportsNet New York since 2016 and has his own weekend esports show on the Black News Channel, which features his Compete4ever Madden League and 2K Association series. He also provided voices for the Madden NFL video game for five years.

He’s currently the host of “Esports Xtra,” a live call-in show on traditional sports, esports and gaming that airs on Twitch, YouTube and Facebook.

MTSU’s College of Media and Entertainment, one of the largest communication programs in the nation, offers degree concentrations in 14 major areas — ranging from journalism to digital media and media management to recording industry management — and is accredited by the Association for Education in Journalism and Mass Communication.

The college also is the home of the Center for Innovation in Media, the Center for Popular Music, the Seigenthaler Chair of Excellence in First Amendment Studies and WMOT-FM Roots Radio 89.5, a 100,000-watt National Public Radio charter station.