MTSU raises sexual assault awareness with ‘What We...

MTSU raises sexual assault awareness with ‘What Were You Wearing?’ displays

The “What Were You Wearing?” clothing installation returns to campus this year at various locations across MTSU’s campus starting Monday through Friday, April 1-5, as a kickoff to Sexual Assault Awareness Month.

“What Were You Wearing?” is an exhibit that recreates the stories of sexual assault survivors by displaying clothing similar to what they were wearing when they were assaulted.

A total of 55 survivors provided stories for the exhibit.

The intent of the exhibit is to stop victim blaming and to end the myth that what a person chooses to wear invites sexual assault, organizers from the MTSU Office of Health Promotion said. 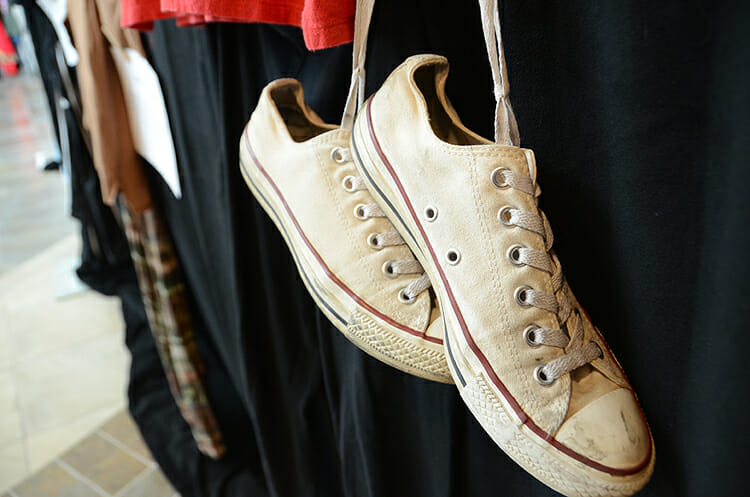 In this 2018 file photo, a pair of white sneakers hangs on one of the panels of clothing shown during the “What Were You Wearing?” sexual assault awareness exhibit on display in the MTSU Campus Recreation Center lobby. The exhibit returns to campus April 1-5 to kick off Sexual Assault Awareness Month. (MTSU file photo by Jayla Jackson)

The exhibit, which also visited MTSU last year, will be displayed in the following locations around campus:

• the south lobby of the Business and Aerospace Building.
• the lobby of the Campus Recreation Center.
• the first floor of the James E. Walker Library.
• the Murphy Center classroom hallway.
• the second floor of the Keathley University Center.

Organizers caution that the exhibit “is powerful and could be triggering for some viewers.” They encourage viewers, especially sexual assault survivors, to consider self-care and to take advantage of university resources like MTSU Counseling Services if needed.

Survivors will also be able to share their own stories through an anonymous text line publicized at each exhibit site. 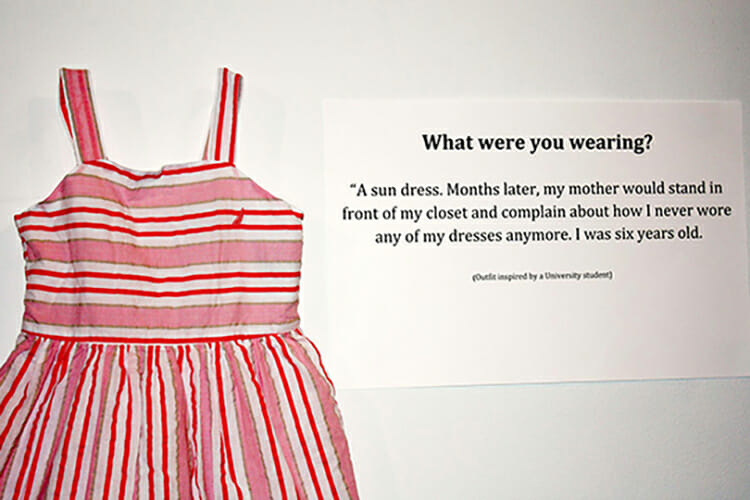 This photo from a “What Were You Wearing” exhibit created at the University of Arkansas depicts a sexual assault survivor’s story with clothing similar to what she wore. The exhibit comes to MTSU April 1-5 for Sexual Assault Awareness Month.

The “What Were You Wearing?” clothing exhibit originated in 2013 at the University of Arkansas and was created by Jen Brockman and Dr. Mary Wyandt-Hiebert.

It was inspired by the poem “What I Was Wearing” by Dr. Mary Simmerling, which will also be featured at each display. Brockman and Wyandt-Hiebert, who were moved by the poem, created the exhibit to end victim blaming and to reflect on what makes our culture ask sexual assault victims “What were you wearing?” in the first place.

The question “What were you wearing?” appears harmless to the interviewer, organizers note, but to the survivor, the question places the burden — and somehow the responsibility — of the attack on their shoulders. The exhibits don’t use the survivors’ actual clothing from their stories because the intent is for participants to see themselves in the outfits and stories.

All displayed clothing was provided by campus organizations that are sponsoring one or more survivor stories.

For more information about the exhibit, contact Lisa Schrader, director of the MTSU Office of Health Promotion, at 615-494-8704 or email lisa.schrader@mtsu.edu. 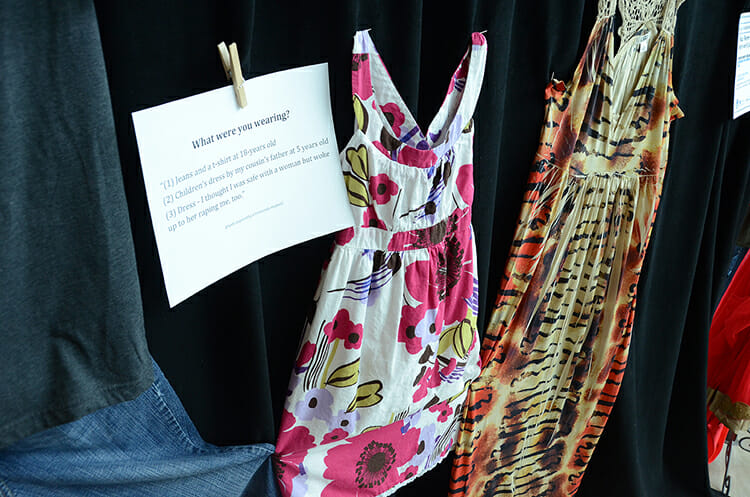 In this 2018 file photo, one of the anonymous stories of sexual assault is paired with clothing shown as part of the “What Were You Wearing?” sexual assault awareness exhibit on display in the MTSU Campus Recreation Center lobby. The displays return to various campus locations April 1-5. (MTSU file photo by Jayla Jackson)