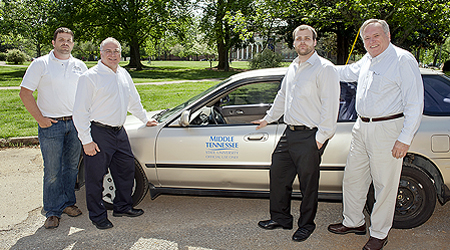 Powered by at least nine MTSU students’ work since 2008, Dr. Charles Perry continues driving toward success in the development of the plug-in hybrid retrofit kit for any car.

Perry, who holds the Russell Chair of Manufacturing Excellence, and a five-member team saw gas mileage increase anywhere from 50 to 100 percent on a 1994 Honda station wagon retrofitted with laboratory prototype plug-in hybrid capability.

Perry is now talking with several potential investors — companies with vehicle fleets — to solicit funds to build and demonstrate a manufacturing version of the plug-in hybrid technology.

The research Honda has been fitted with electric motors in each rear wheel and a large lithium-ion battery, which is mounted in the rear of the vehicle. As lithium-battery technology improves, Perry said, the battery size can be reduced in production models.

Switching on power to the two rear wheels’ electric motors made a huge difference by reducing the power required from the internal-combustion engine, he added.

“The whole point was to demonstrate the feasibility of adding the electrical motor to the rear wheel of the car without changing the brakes, bearings, suspension — anything mechanical,” Perry said.

The technology’s gas-saving principle uses an electric motor to supplement the power coming from the internal combustion engine. You can watch Perry explaining the process in the video above.

All nine students, who now have graduated with bachelor’s or master’s degrees, came from MTSU’s Department of Engineering Technology. Each has provided unique talents and abilities to bring the project to fruition.

The most recent group includes:

Jay Perry views the rotor he has removed from the stator, which is attached to the axle bearings. In the entire process, nothing alters the car's bearings, brakes or suspension.

“It was a huge honor to work on it,” said Brubaker, a May 2012 graduate. “I got to collaborate with some of the best minds —not only the other students, but the faculty.

“The wheel-hub motor is an answer to a problem. It’s innovative technology. You can take and bolt it on a car. When people see that, their eyes light up. They think it might cost a lot of money and are surprised when you tell them it might be $3,000. We have a lot of student projects that I have been a part of, but the wheel-hub was my favorite out of the whole thing.”

Jay Perry will remain heavily involved in the project this fall. Other students will join the team as plans develop.

Perry, who also is a professor of engineering technology, said the students’ contributions proved invaluable.

“We’ve had heavy student involvement,” Perry said. “One of our goals has been to utilize students in the building, testing and design. Nine students in the last five years very much were involved in all aspects of developing this technology.”

The plug-in hybrid retrofit kit is applied to a vehicle's rear wheels. After switching on the traction motors, gas mileage can increase 50 to 100 percent.

Perry said they have reached what industry insiders call “the valley of death” as they try to transfer the project’s technology from the laboratory to a commercial product.

“We have gained proof of concept in terms of feasibility,” he said. “We need quite a bit of money to have proof of product. What we’ve achieved is a demonstrated technology, not a proven technology. Investors want to see proven field-tested performance and reliability. We have to pass through this transition, from feasibility to true, viable product.”

Perry, who had 40 patents in a 28-year career with IBM before coming to MTSU, said a manufacturing partner has stepped forward “and is totally committed to us” and will accompany him to anticipated upcoming presentations.

Perry said Lou Svendsen, university counsel with the Tennessee Board of Regents, will join him in approaching companies that have both U.S. and worldwide fleets of vehicles, especially those “interested in green technology, reducing carbon footprint and savings in fuel costs.”