Join the ‘Amen Corner’ at MTSU.. 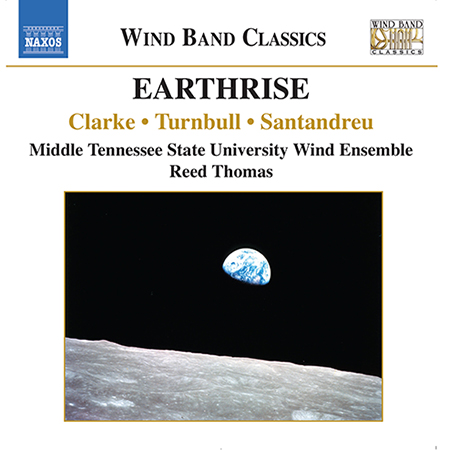 MTSU’s Wind Ensemble continues to stand alone among Tennessee university bands with the release of its second CD, “Earthrise,” a collaboration with three international composers, on one of the world’s most prestigious classical labels.

“We’re the only school in Tennessee that has one CD with Naxos, let alone two,” said Dr. Reed Thomas, director of bands and a professor of music and conducting in MTSU’s renowned School of Music.

Thomas conducted the Wind Ensemble for “Earthrise” as well as the 2011 release “Angels in the Architecture.”

“It’s such a great opportunity and a great experience for our students.”

“It brings them into that world of recording that many musicians, let alone student musicians, never experience,” Parkinson said.

“Of course, preparing and performing a piece is a given in music education, but to have the opportunity to schedule several days for working with an internationally recognized recording company is very rare. It’s a wonderful opportunity to provide documentation of their work for years and years to come.”

The 12-song collection, which is available for MP3 purchase now and was released on CD Feb. 25, is part of the Naxos Classical — Wind Band Classics Series.

You can listen to previews of the CD on iTunes at http://ow.ly/tvy74 and learn more about it at the Naxos site at http://ow.ly/steCZ.  You also can hear the MTSU Wind Ensemble live in a special free concert set for 7:30 p.m. Thursday, March 20, at Murfreesboro’s First United Methodist Church on West Thompson Lane.

The featured composers’ backgrounds range from military bands to rock and jazz music.

Nigel Clarke’s title piece “Earthrise,” for example, represents the drama of the entire NASA Apollo 8 flight. That work contrasts with the CD’s “Heritage Suite,” a representation of the day-to-day life of the historic market town of West Malling in Kent, England.

And Clarke’s “Their Finest Hour,” celebrating the Battle of Britain in 1940, uses the actual alarm bell that called the Royal Air Force fighter pilots to their planes.

Clarke, a former MTSU composer-in-residence, recorded the pieces with the Wind Ensemble in spring 2012 after the “Earthrise” U.S. premiere performance in Hinton Music Hall inside MTSU’s Wright Music Building.

You can watch the ensemble, conducted by Clarke, perform “Samurai,” a song not included on the CD, during the 2013 Wind Band Conference at MTSU in the video at the bottom of this page.

Composer Kit Turnbull, a friend of Clarke’s, provided “Griot,” allowing a trombone to assume the role of the griot, a poet, storyteller and musician who chronicles West African tribal stories through words, mime and movement.

“This trombone concerto was written especially for our soloist, professor David Loucky,” Thomas said. “It’s a very different piece than you normally expect from a trombone concerto, and I think people will really enjoy it.”

Jesús Santandreu’s “Sortes Diabolorum” evokes the violence of the Inquisition and the ultimate triumph of common sense over superstition.

“We’d met in Chicago at a conference, and he gave me a copy of his work and said, ‘I’ve heard a lot about you at MTSU, please play this and enjoy it,’ just like that. We did!” the professor said.

“We’d met in Chicago at a conference, and he gave me a copy of his work and said, ‘I’ve heard a lot about you at MTSU, please play this and enjoy it,’ just like that. We did!

“He spent a week with us and recorded it … and then I saw him again and asked him if he’d ever conducted his own music. He said no, and long story short, he came to MTSU to study conducting with me, and he’s now a second-year graduate teaching assistant here in the School of Music.”

Thomas said the MTSU ensemble members hope to work again with all three composers. Clarke is already making plans to work with the group next year for a potential gala premiere, and the ensemble certainly would be proud to continue its work for Naxos.

“Naxos titles are distributed internationally, via hard copy and streaming audio, so this is a wonderful thing for our students,” School of Music director Parkinson said.

“With this partnership, we’re essentially dropping a very large rock in the musical waters right now, and it will have an impact for years to come.

“For our students, the school and the university to have the opportunity to record a second CD with Naxos speaks very well as to the esteem with which they hold us,” Parkinson continued. “International composers are getting outstanding performances of their works from us that others will be striving to attain. It’s a winning situation all around.”

Musicians playing on the new “Earthrise” CD are: