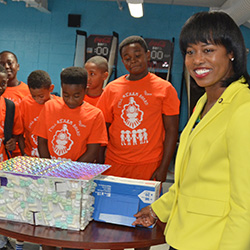 The conversation from a national official to a group of budding East Nashville scientists was profound and to the point: Persevere. Stay focused. Never give up. Do and be your best at all times.

These were some of the energizing messages LaDoris “Dot” Harris, a director with the U.S. Department of Energy’s Office of Economic Impact and Diversity, shared with nearly 40 East Nashville youth attending the June 17 Green Girls STEM (science, technology, engineering and mathematics) education program at Martha O’Bryan Center (http://www.marthaobryan.org).

Harris spent nearly 90 minutes with the teenagers, who participate in the program that promotes renewable energy. Harris was invited to speak by MTSU WISTEM (Women in STEM) Center Director Judith Iriarte-Gross, who had heard Harris communicate with passion about her career in 2013 at the Oak Ridge National Laboratory.

“My message to the Martha O’Bryan school is one of perseverance, never give up and stay focused on what you’re doing,” said Harris.

Near the end of Harris’ visit, she and Iriarte-Gross helped judge an activity where six teams competed in a design contest to create green energy homes. The middle school students used crafts and cardboard boxes to build their houses in the days preceding the guest speaker’s appearance.

“As I told the kids, I’ve been to probably 20-plus countries around the globe, and nothing’s more amazing and more innovative/creative than the mind of an American kid,” she said. “We have to have them first understand themselves that they are capable (of achieving). Once they understand and appreciate the values of themselves first, you’ll be amazed how they flourish and grow from that.”

Among the attendees was MTSU sophomore chemistry major Josh Loomis of Murfreesboro, one of two WISTEM Center student participants who work directly with the Martha O’Bryan Center teens in the program.

• Marian Wilson, new assistant to the president for Institutional Equity and Compliance; and

• Rose Johnson, grants coordinator for the College of Basic and Applied Sciences.

Junior biology major Caleb Hough of Murfreesboro was unable to attend because of a class commitment, Iriarte-Gross said, adding that Hough works with the center teens once a week.

For more information about the WISTEM Center, call 615-494-7763 or email Iriarte-Gross at Judith.Iriarte-Gross@mtsu.edu.

Dot Harris, director in the Office of Economic Impact and Diversity for the U.S. Dept. of Energy, promotes STEM (science, technology, engineering and mathematics) to middle school students participating in the Green Girl program at the Martha O’Bryan Center in Nashville July 17.