'The Artist as Entrepreneur': .. 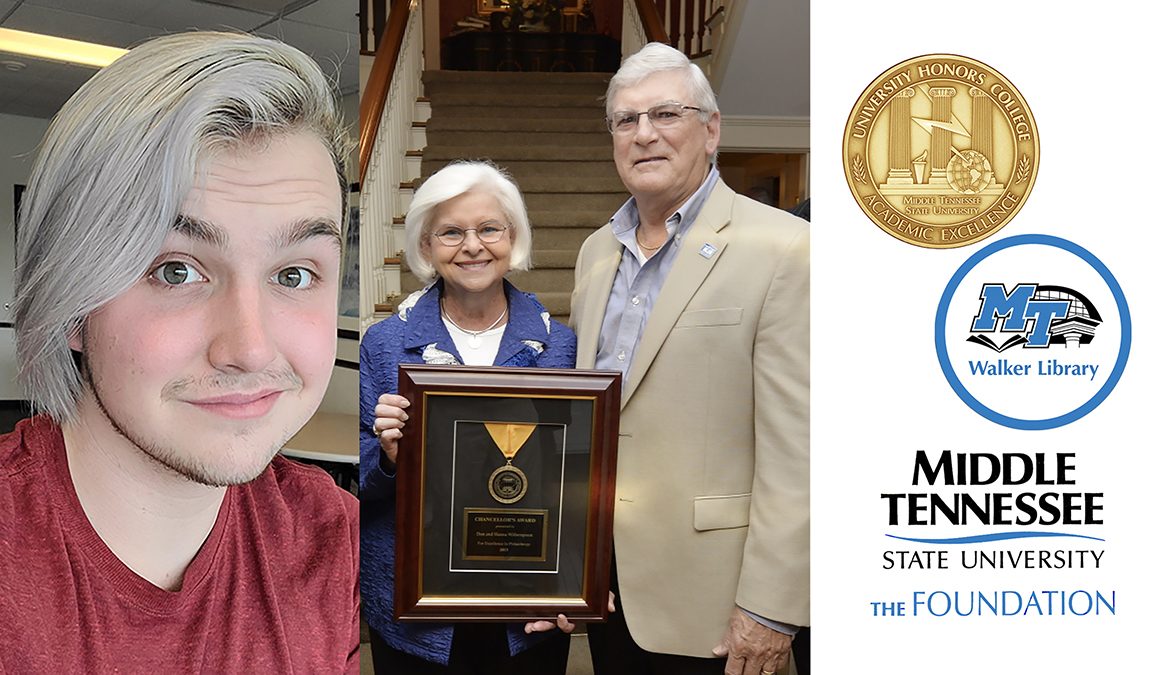 From the deep recesses of a lasting romance is emerging a lasting legacy that will help MTSU students for a long time.

Dale Clifford, a psychology major with minors in social welfare and musical theatre performance, is the inaugural recipient of the Hanna Romans Witherspoon Endowed Scholarship, created for undergraduate students who are involved with the University Honors College and work as library student assistants. 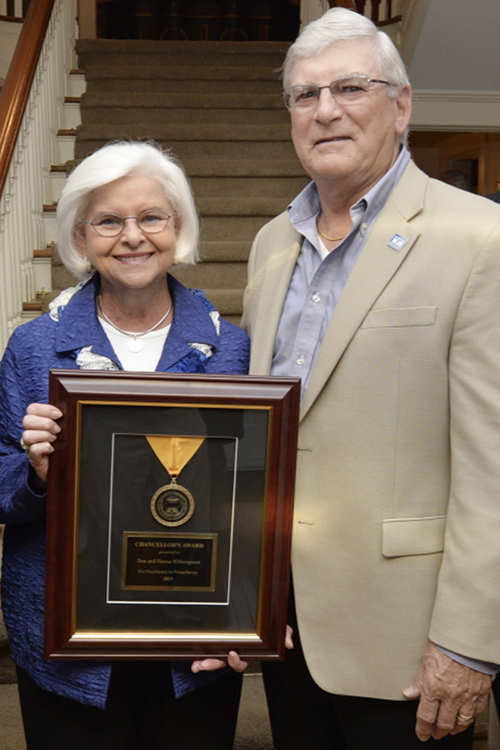 MTSU alumni Hanna, left, and Don Witherspoon accept an award for their assistance to the university at a reception for supporters of the MTSU Centennial Campaign at the President’s House in this 2015 file photo. Don Witherspoon has established a new scholarship to pay tribute to his wife’s work in the MTSU library during their student days. (MTSU file photo by Andy Heidt)

The endowment is funded through a $25,000 gift from longtime MTSU supporter Don Witherspoon and is named for his wife. Both are MTSU alumni.

Dr. John Vile, dean of the University Honors College, has known the Witherspoons well for years.

“Not all scholarships have a love story behind them, but this one is especially poignant because it was a gift from Don to his wife, whom he had met while she was working at the university library,” Vile said.

Hanna Witherspoon, a Czech national born in the Philippines, came to the United States at age 6 after her mother married an American soldier from Pikeville, Tennessee.

For all four years of her college life at what was then Middle Tennessee State College, Hanna worked in the library, where she met and fell in love with Don Witherspoon. She graduated with a bachelor’s degree in English in 1964 and married Witherspoon in August of that year.

Hanna retired in 1999 following careers in secondary school education and with American Airlines. Since the Witherspoons moved to Murfreesboro in 2000, she’s been involved with numerous philanthropic groups, including the United Way, Alive Hospice, the MTSU Foundation and the MTSU Alumni Association.

“Don and Hanna have been stalwart alumni and loyal supporters of the Honors College with Don serving on our board of visitors,” Vile said.

The Witherspoons also have created scholarships for incoming freshmen.

Clifford is a university honors student as well as a student assistant in MTSU’s James E. Walker Library.

He said the $1,000 from the scholarship fund gives him an opportunity to expand his academic career and possibly help pay for graduate school.

“This scholarship will help my family … not have to struggle with loans, which takes so much stress off of us,” Clifford said. “I want to personally thank Hanna and Don Witherspoon for this honor.”

The junior from Cottontown, Tennessee, also worked in his high school library, which is why he considered a library job “a perfect fit” when he entered college. He believes his major, minors and campus job blend together well.

“I chose psychology because I have this passion for people,” Clifford said. “As for my minors, I chose social welfare to help with getting into a therapy field. My musical theatre performance minor is for me so that I can still have this outlet that I love so much. It also allows me to focus on some music classes so I can later look into researching music therapy.”

Candidates for the scholarship must be full-time undergraduate Honors College students, and students working in the James E. Walker Library will receive first preference. A candidate also must be a junior or senior with a minimum overall 2.5 GPA and financial need as determined by the university.

To find out more about the Hanna Romans Witherspoon Endowed Scholarship, contact Paul Wydra, director of development initiatives for the Walker Library and Honors College in MTSU’s Development Office, at paul.wydra@mtsu.edu.