It went live 50 years ago Tuesday as a student-run “educational radio station,” and MTSU’s WMOT-FM Roots Radio 89.5 is still focusing on informing its audience about great music and local, national and international news.

The 100,000-watt National Public Radio charter member station celebrated its 50th birthday Tuesday, April 9, with a three-hour live broadcast enjoyed by a host of supporters inside the Cyber Café on the campus of Middle Tennessee State University, which launched WMOT on April 9, 1969. 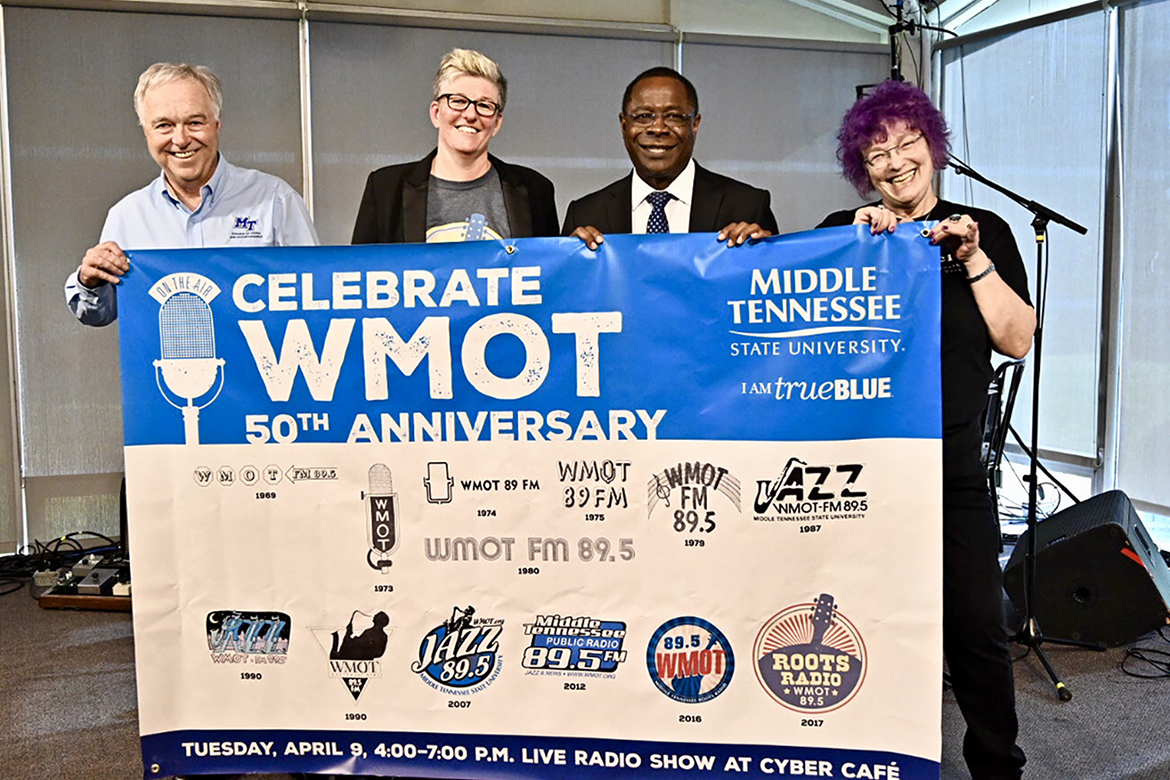 MTSU President Sidney A. McPhee applauded WMOT’s staff for its dedication in shepherding the station through periods of transition over the years, including its most recent switch to Americana music, the brainchild of Ken Paulson, outgoing dean of the College of Media and Entertainment.

“We take the education of our students seriously and we’re committed to make sure we provide the best resources and the best experience that will … help us to continue to grow as one of best programs in the country,” McPhee told the crowd. “WMOT is still alive and doing exceptionally well.” 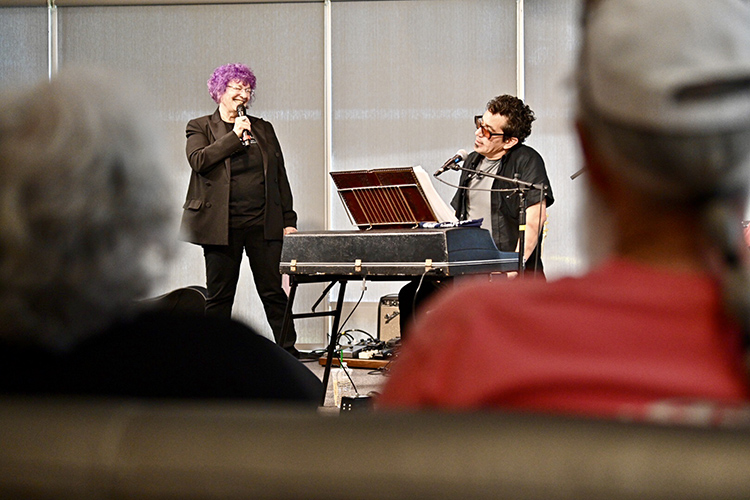 WMOT-FM began April 9, 1969, as a 780-watt mixed-format rock station broadcasting out of MTSU’s Dramatic Arts Auditorium to the campus and adjoining neighborhoods. National Public Radio was created in 1970, and WMOT became a charter member.

Val Hoeppner, executive director of the station who also directs the university’s Center for Innovation in Media, said the celebration was not only a tribute to WMOT, but also to public radio’s origins with passage of the Public Radio Broadcasting Act of 1967 and its emphasis on education.

“Through the years we’ve revised our mission statement to better reflect who we are and how we serve our community,” she said. “Today we champion music discovery, music experiences and building community around Americana music.”

The listener-supported station boosted its power to 50,000 watts in 1971, expanding its reach across Middle Tennessee and into Kentucky and Alabama. It added classical music to its format and expanded its staff with professional broadcasters and news reporters, launching a continuing streak of winning state and national news and service awards, including a Corporation for Public Broadcasting Award of Excellence for News Reporting. 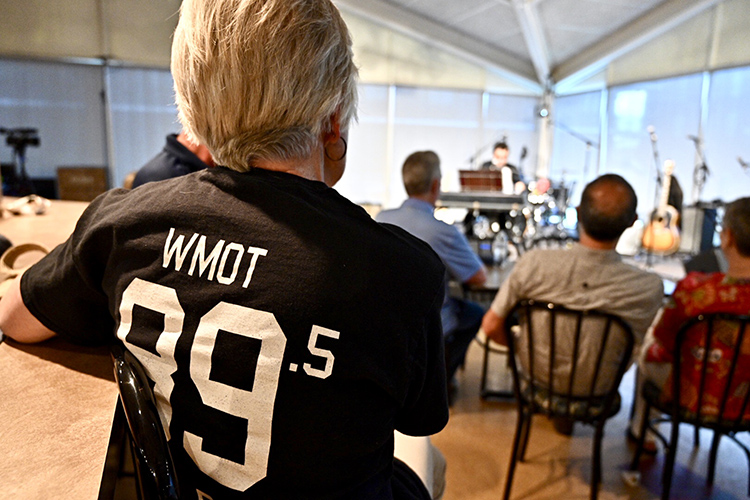 A WMOT Roots Radio 89.5 listener sports a T-shirt of support while she and others listen to indie-folk artist A.J. Croce during his live set at the radio station’s 50th anniversary celebration held Tuesday, April 9, at the Cyber Cafe on the MTSU campus. (MTSU photo by J. Intintoli)

WMOT moved into its longtime headquarters in the McWherter Learning Resources Center when that facility opened in 1975. In 1980, WMOT became Tennessee’s first radio station to use satellite broadcasting. Two years later, it debuted its all-jazz format.

In 1990, the station became part of the then newly-formed College of Mass Communication and boosted its signal strength to 100,000 watts with a new, taller antenna at a new site in 1996.

WMOT began broadcasting online in 2003 at www.wmot.org, expanded its reach to 1 million potential listeners with an antenna upgrade in 2005, and began simulcasting on HD Radio in 2008 to offer better fidelity via digital technology.

In 2009, WMOT added news and talk programming to its format and in 2011 began airing classical music on weekdays. It moved into the new Bragg Media and Entertainment Building in 2012 as part of MTSU’s Center for Innovation in Media, which put WMOT and the student-run newspaper, TV station, radio station and record label under the same roof.

WMOT changed to its current Americana format in September 2016 in a partnership with Music City Roots, a Nashville-based firm that provides programming for both radio and television. The collaboration has helped the station expand its audience nationally and internationally.

Paulson noted that WMOT’s success has led to expanded usage of the Cyber Café as a weekend venue to showcase singers and songwriters.

“When you have success with something like WMOT, other good things come with it,” he said. 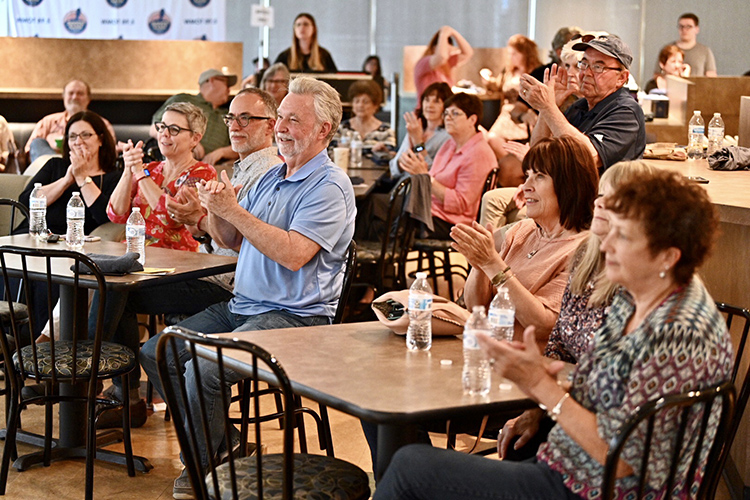 WMOT is currently the region’s only Americana music channel and has been an active partner in the Americana Music Association’s annual AmericanaFest celebration, sponsoring live shows, the event’s official viewing party, simulcasts and live streams and more.

You can listen to an audio history of WMOT from producer Craig Havighurst at http://ow.ly/EwBU30onAQ0. 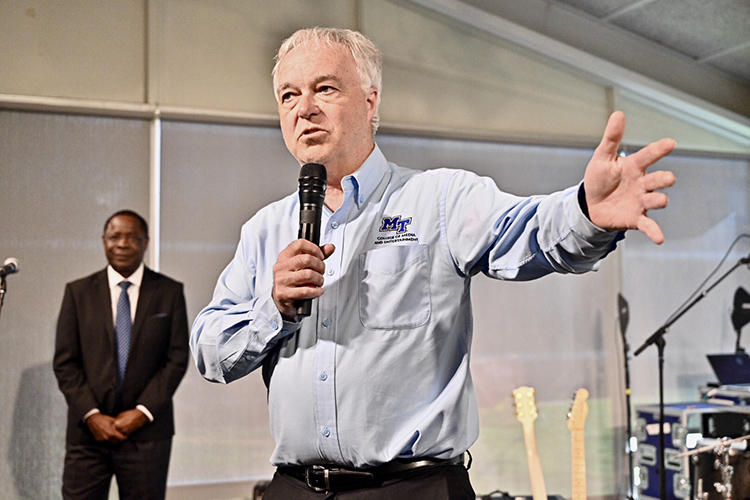