'MTSU On the Record' reviews C.. 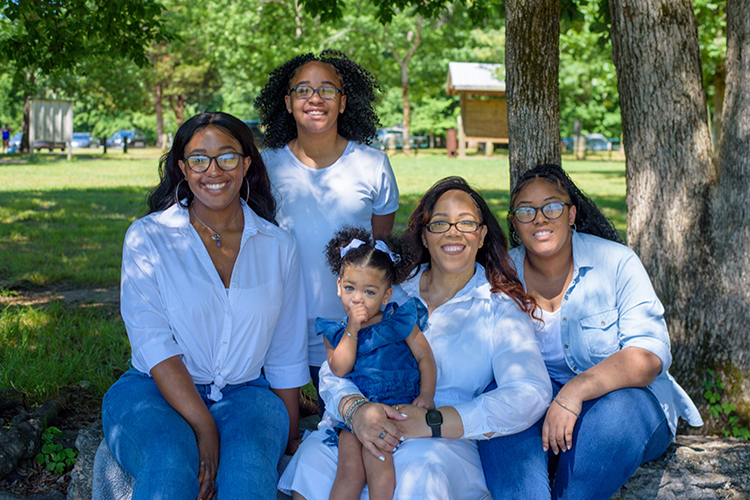 When Pashion Wofford was in her senior year of high school in 1995, most of her new classmates were trying out the new Windows 95 computer software or listening to “Waterfalls” by R&B trio TLC.

Wofford, on the other hand, was balancing being a single parent to her little sister, Cassie, who was in the fifth grade. She knew she didn’t have time to go to college then, so she set her dream of being an educator to the side and went straight to work, focused on raising her sister.

Now, 27 years later at the age of 46, Wofford is just a few months away from earning her bachelor’s degree in integrated studies from Middle Tennessee State University with a focus in education and leadership.

“I get emotional when I think about how far I’ve come,” said Wofford, who lives in Antioch, Tennessee, with her four daughters. “My journey to this point has been long and it never seemed like the right time. Now that time has come.”

She had plans to enlist in the U.S. Navy after high school, but that changed when she gained custody of her sister. She instead found herself a single parent her senior year of high school, going to parent-teacher conferences, riding the same bus, and making sure her sister was “able to soar.”

“Sometimes we have to make sacrifices for someone else, and it doesn’t feel good every time,” she said in an emotional video she posted to Facebook. “But I will never ever regret making sacrifices for my children and my sister. Because that’s what love does…love sacrifices.”

Wofford had always known she wanted to be an educator, something that she decided on when she was in second grade. She homeschooled her kids for several years and eventually decided to start a summer program, Brilliant Child Enrichment Center, to enable children from pre-K to eighth grade to avoid the diminishing effects that often occur during idle summer months.

“I started the program with three students plus my daughters in my home,” she said. “I really enjoyed making lesson plans and creating a curriculum and finding a way to make their lessons connect with dance or music or art.”

She had to stop the program because of the pandemic and Wofford said that left a big void. That is when she decided to look at finishing her degree at MTSU through University College, which offers flexible programs attractive to working adults. She had her associate degree and had taken a few classes here and there beyond that, but it had been tough to find the time to finish.

Wofford thought she could get a degree in education to boost her business with the enrichment center. She was researching different universities and said MTSU “fit like a glove.”

“With how MTSU ranked in education among others in the area, it was perfect for me,” she said. “I wanted to be a part of that successful environment.”

“I needed 13 classes,” Wofford said. “I knew it was going to be hard. I am working full time; I have four kids at home. But I just continuously told myself I could do this.”

And she has excelled in her classes, realizing just a few weeks ago that she was going to graduate in August with honors. She said she never envisioned that as a possibility, and she actually had to double-check with University College to make sure she was right.

She hopes that her story of finishing a degree later in life can inspire others, because she knows so many people like her put off going to college because they had to make sacrifices.

“Being delayed is not a denial,” she said. “Delayed gratification can become your friend. Everyone has their own journey, so walk out yours to the beat of your heart.”

She said she wanted to finish to show her daughters that regardless of possible unexpected delays, they can accomplish anything with intent and hard work.

One of her children in particular, oldest daughter Christian, is set to follow in her mom’s footsteps, attending MTSU this fall and planning to fulfill a similar dream by majoring in education.

“Neither of my parents graduate college,” Wofford said. “I’m so grateful I get the chance to show my daughters how important it is to stay in the fight and that they can do it.”

If you have been curious about returning to school, you can contact MTSU’s University College at 615-494-7714 or visit MTSU.edu/FinishNow.