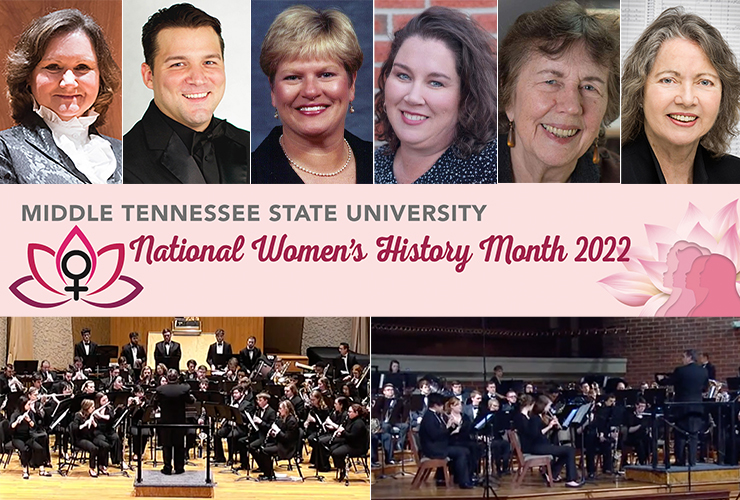 The MTSU Symphonic Band and the MTSU Wind Ensemble will perform works by three women composers at 7:30 p.m. Thursday, March 24, in the T. Earl Hinton Hall of the Wright Music Building, 1439 Faulkinberry Drive.

The wind ensemble will open with “Fanfare for the Uncommon Woman, No. 5” by Joan Tower, who is the Edelman Professor of Music at Bard College in Annandale-on-Hudson, New York. She won Grammy Awards for Best Contemporary Classical Composition in 2008 and 2016.

“To date, Tower has composed six works in the ‘Fanfare for the Uncommon Woman’ series, some of which are written for full orchestra,” said Dennis Hawkins, a lecturer in the MTSU School of Music and assistant director of athletic bands.

The work MTSU will perform is for trumpet quartet. Hawkins said some works in the series use the same instrumentation as American classical composer Aaron Copland used for his “Fanfare for the Common Man.”

Stacy Jernigan, an MTSU alumna who is band director at Wilson Central High School in Lebanon, Tennessee, and president-elect of the Middle Tennessee School Band and Orchestra Association, will be the guest conductor for this piece.

“Ceremonies” by Ellen Taaffe Zwilich was written in three movements. Zwilich won the 1983 Pulitzer Prize in Music, the first woman ever to win the coveted honor. She also is the recipient of four Grammy nominations, a Guggenheim Fellowship and the Arturo Toscanini Music Critics Award, among numerous other honors.

Zwilich was named to the first ever Composer’s Chair in the history of Carnegie Hall in 1995. She currently holds the Krafft Distinguished Professorship at Florida State University in Tallahassee, Florida.

The symphonic band will perform “Italian Rhapsody” by Julie Giroux, who won the 1992 Emmy for Outstanding Individual Achievement in Music Direction. She was the first woman and the youngest person ever to win in that category. Her television and film credits include “North and South,” “The Karate Kid Part II,” “White Men Can’t Jump” and “Broadcast News.”

One of Giroux’s compositions, “Integrity March,” was performed as then-Vice President-Elect Kamala Harris was introduced during the 2021 Presidential Inauguration Ceremony in Washington, D.C.

Jo Ann Hood, winner of the 2020 True Blue Citation Alumni Award for Achievement in Education (Non-MTSU), will be recognized at the concert for her achievements. Over her career, Hood has been a band director at five secondary schools, including 30 years at John Overton High School in Nashville.

A campus parking map is available at http://bit.ly/MTSUParking. For more information, contact Hawkins at 615-494-8929 or dennis.hawkins@mtsu.edu.