In the News: Credit union arti.. 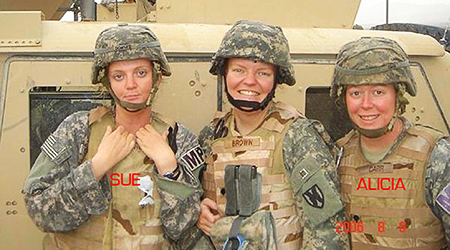 More than one out of every 10 military veterans who served in Iraq and Afghanistan is a woman.

In this 2007 photo, U.S. Army veteran Sue Downes, who is featured in the documentary “Service: When Women Come Marching Home,” is shown receiving the Army Achievement Medal for her service. (Photos courtesy of ServiceTheFilm.com)

More than 57 percent of the female veterans of the Iraq and Afghanistan wars have received health care from the Department of Veterans Affairs, VA statistics show. And of that 57-plus percent, 89.8 percent have used VA health care more than once.

Middle Tennessee State University and the Department of Veterans Affairs Tennessee Valley Healthcare System are teaming up for a free public event to inform women veterans about health and educational benefits. It will be held at 7 p.m. Monday, April 15, in the Keathley University Center Theater on the MTSU campus.

The event will honor and recognize women veterans with a documentary screening and informational session on VA health care and education benefits.

Click on this promotional poster for the documentary “Service: When Women Come Marching Home” to learn more.

“Women veterans are encouraged to attend April 15 at the KUC to learn more about their VA benefits,” said Chris Conklin, a spokesman for the Tennessee Valley Healthcare System.

“Veterans who attend this event will have the opportunity to not only see what their education benefits are but how the they can take advantage of all the benefits they have earned through their service, including health benefits. Women veterans, in particular, also will have the chance to see what services are available specifically for them in regard to health care at VA Tennessee Valley Healthcare System.”

U.S. Army veteran Sue Downes, a Gallatin, Tenn., resident, is shown in this undated photo. Downes, a driver and gunner while serving in Afghanistan, had both legs amputated below the knee when her Humvee hit landmines in 2005.

Sue Downes, a Gallatin, Tenn, resident who is featured in the documentary “Service: When Women Come Marching Home,” will be the keynote speaker for the April 15 event at MTSU.

The documentary, which also will be shown, highlights the struggles and triumphs of returning home as a combat-wounded woman.

Downes, a Gallatin, Tenn., resident who served as a driver and gunner in Afghanistan, had both legs amputated below the knee after her Humvee hit landmines in 2005. She will take part in a question-and-answer session during the event with other veterans in attendance.

Women veterans will be able to talk to staff from the VA and MTSU on maximizing their available education and health care benefits and register for VA health care.

MTSU is welcoming women veterans and their families from across the Midstate, including those now attending area community colleges, to provide information on educational benefits.

Advisers from MTSU’s VetSuccess on Campus office also will be at the program to provide information.

MTSU is the only Tennessee university selected by the U.S. Department of Veterans Affairs for a “VetSuccess on Campus” program. It also has been named a military-friendly institution for three years in a row by G.I. Jobs magazine.

For more information about VA health services in Tennessee, visit www.tennesseevalley.va.gov. To learn more about the documentary, visit http://servicethefilm.com.