“Visionary Women: Champions of Peace and Nonviolence” is the theme of the March 2019 observance of National Women’s History Month at MTSU. 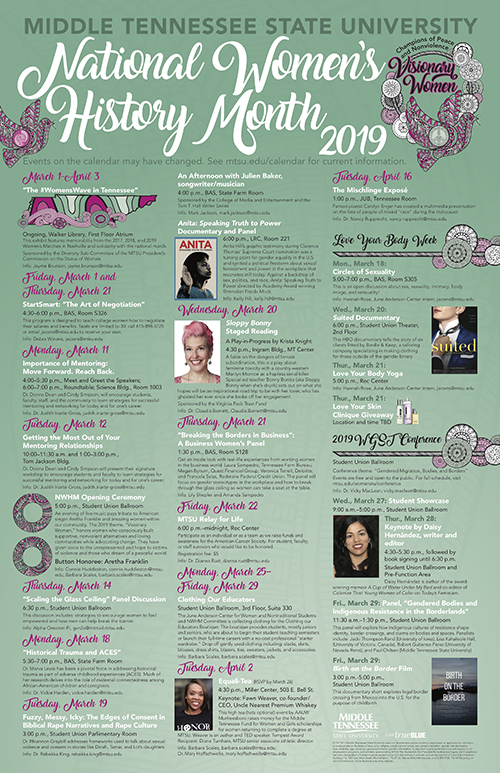 Click the poster to view a larger PDF version of the full two-page calendar.

The lineup of activities celebrates “women who consciously built supportive, nonviolent alternatives and loving communities while advocating change,” according to MTSU’s NWHM calendar. “They have given voice to the unrepresented and hope to victims of violence and those who dream of a peaceful world.”

Julie Cohen, the director of the Academy Award-nominated documentary “RBG,” will be the keynote speaker.

Cohen’s film about the life and career of U.S. Supreme Court Associate Justice Ruth Bader Ginsburg will be shown at 2 p.m. and 6 p.m. Monday, March 18, in the Student Union Ballroom.

Beverly Keel, chair of MTSU’s Department of Recording Industry, will lead a discussion of the film with Cohen at 7:30 p.m.

Live music will be part of the festivities at the opening ceremony at 5 p.m. Tuesday, March 12, in the Student Union Ballroom. MTSU once again will recognize women “trailblazers” on campus and in the community at the ceremony, including this year’s honorees:

• Dr. Mary Evins, professor of history and coordinator of the MTSU chapter of the American Democracy Project.

• Dr. Barbara Turnage, professor of social work and interim associate dean for the College of Behavioral and Health Sciences.

• Lynda Williams, professor of criminal justice administration, former deputy assistant director of the Office of Human Resources of the U.S. Secret Service, and an MTSU alumna. 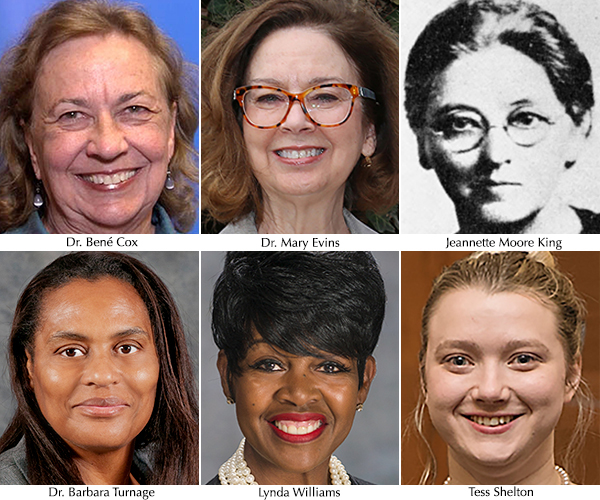 Soul singer and civil rights supporter Aretha Franklin is featured on the 2019 National Women’s History Month button, which is distributed around campus.

Franklin, who died in 2018, was a Grammy Award-winning artist and the first woman inducted into the Rock and Roll Hall of Fame.

Born in Memphis and raised in Detroit, Franklin made generous donations of money and time to the civil rights movement and received the Presidential Medal of Freedom, the nation’s highest civilian honor, for her activism and her talent.

“We will celebrate outstanding women for their unrelenting and inspirational efforts to make a world a more peaceful place,” said Barbara Scales, director of the June Anderson Center for Women and Nontraditional Students and co-chair of the National Women’s History Month Committee.

“Their lives demonstrate the power of voice, of taking action and of believing that meaningful and lasting change is possible in our democratic society.”

• A visit with singer/songwriter Julien Baker, a former MTSU student and now a critically acclaimed musician, who’ll return to campus at 4 p.m. Tuesday, March 19, in the State Farm Lecture Hall of the Business and Aerospace Building.

• Daisy Hernandez, author of “A Cup of Water Under My Bed” and co-editor of “Colonize This! Young Women of Color on Today’s Feminism,” who will speak at 4:30 p.m. Thursday, March 28, in the Student Union Ballroom. A book signing will follow her address until 6:30 p.m.

Hernandez, an assistant professor in the creative writing program at Miami University in Oxford, Ohio, has reported for The Atlantic, The New York Times and Slate.com. She also has written for National Public Radio’s “All Things Considered” and “Code Switch.”

• Fawn Weaver, co-founder and chief executive officer of Uncle Nearest Premium Whiskey, the new product honoring Nathan “Nearest” Green, the first African-American master distiller on record in the United States, will speak at “Equali-Tea,” a high tea sponsored by the Murfreesboro chapter of the American Association of University Women.

The event, which is a scholarship fundraiser for the Middle Tennessee Fund for Women and Girls, is slated for 4:30 p.m. Tuesday, April 2, at the Miller Education Center, 503 E. Bell St.

• MTSU Senior Associate Athletic Director Diane Turnham will receive the annual Tempest Award at the April 2 “Equali-Tea” for acting “to address the systemic barriers to equity for women and girls,” according to AAUW.

All MTSU National Women’s History Month events are free and open to the public.