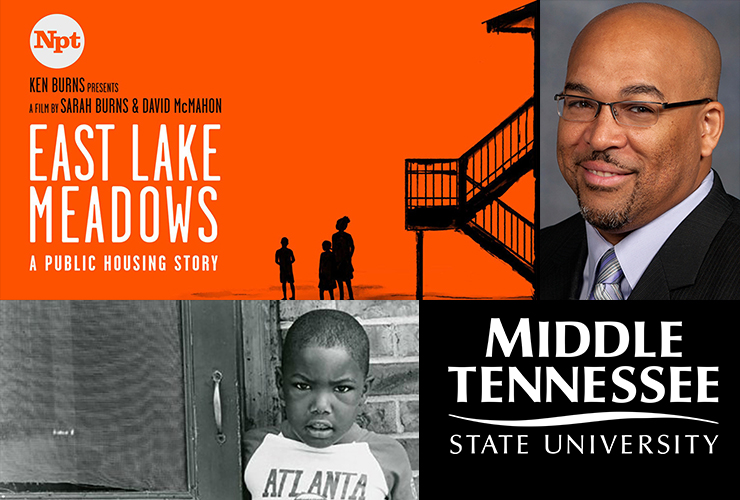 An MTSU professor will tackle questions about race, poverty and public housing during the online screening of a Ken Burns documentary.

Louis Woods, an associate professor of history and director of the Africana Studies program, will participate in a discussion about “East Lake Meadows: A Public Housing Story.”

The virtual event, presented by Nashville Public Television and other public television stations, will start at 6 p.m. Thursday, April 30. To RSVP or to log in, go to https://ovee.itvs.org/screenings/7i62z.

With highly acclaimed documentarian Ken Burns as executive producer and Sarah Burns and David McMahon as producer/directors, “East Lake Meadows” examines a former public housing community in Atlanta and the deterioration of the neighborhood over a period of 25 years.

“We’ll be using OVEE (an online social screening platform) to watch … the documentary and comment about the challenges of public housing, displacement, gentrification and racial stigma,” Woods said.

Woods, the winner of the 2018 John Pleas Outstanding Faculty Award at MTSU, earned his bachelor’s degree in Africana studies from the State University of New York at Stony Brook, graduating Phi Beta Kappa. He obtained his master’s and doctoral degrees in African American history from Howard University in Washington, D.C.

In addition to Woods and Sarah Burns, discussion participants will be Brigette Jones, curator of social history for the Tennessee State Museum, and James Fraser, a visiting scholar and professor at the Center for Urban and Regional Affairs of the University of Minnesota-Twin Cities.

For more information, contact Woods at louis.woods@mtsu.edu or NPT at tv8@wnpt.org.