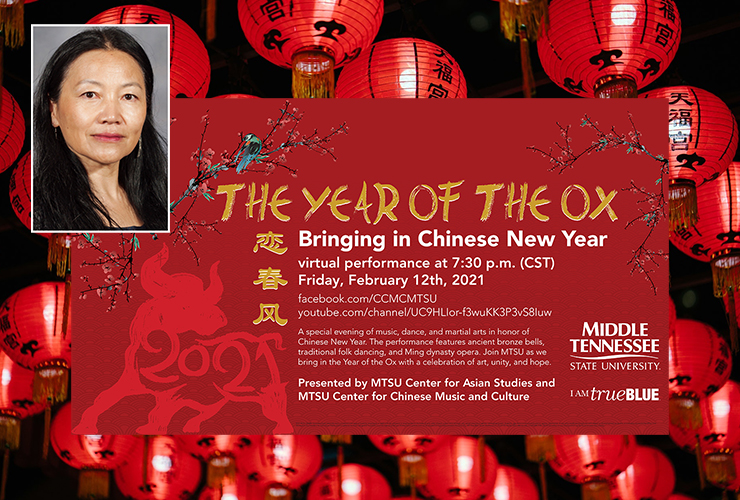 The MTSU Center for Chinese Music and Culture will welcome the Chinese New Year with two special virtual performances.

On the first night of the Year of the Ox, the center will host a special selection of music, dance and martial arts performed by MTSU’s partner universities in China at 7:30 p.m. Central time, Friday, Feb. 12, at the Center’s Facebook and YouTube channel.

“This is … a special time for families to get together to enjoy food, laughter, gifts and stories,” said Mei Han, center director.

The concert will feature traditional music such as Nanyin, a poetic song genre that can be traced back to the Han dynasty, which lasted from 206 BCE to 220 CE.

The Nanyin song, “Heaven, Earth and Humanity,” was written by composer Cai Yayi in December 2020 as a prayer of healing during the COVID-19 pandemic. The lyrics come from the “Dao De Jing,” or “The Way of Dao,” a work written by philosopher Lao Tzu in the sixth century BCE.

Also on the program is a work of Kunqu. Widely respected as the most sophisticated form of Chinese opera, Kunqu was developed in the Chinese Ming dynasty from the 14th to 17th century.

“The excerpt performed in this concert is ‘Dreaming in the Garden’ from ‘The Peony Pavilion,’ written in 1617, which is considered the most representative of the Kunqu genre and is known for its romantic story and exquisite style of singing and performance,” Han said.

“Empty City,” a contemporary composition written for Dasheng bronze bells of the Song Dynasty (960-1130) and two pianos, is also part of the concert. The melody incorporates “Yangzhou Man,” a song by famous poet Jiang Kui (1154-1211).

“The work’s ritual spirit and daunting silence echo the emptiness of an abandoned city,” Han said.

In addition, Han has recorded a presentation that will be part of the Flushing Arts Center New Year Temple Fair, hosted by Flushing Town Hall in Flushing, New York. The ceremony is slated for 1 p.m. Central time, Sunday, Feb. 14, at www.youtube.com/user/FlushingTownHall.

Han’s contribution to this virtual party is a brief introduction to the historical background of the use of music in the Chinese New Year and its importance in the celebration of events. She also provided a previously recorded chamber music performance by the CCCM’s visiting music ensemble.

For information on both events, contact Han at mei.han@mtsu.edu or ccmc@mtsu.edu.

Opened in 2016, the MTSU Center for Chinese Music and Culture is the only center of its kind in North America. CCMC’s mission is to engage regional, national and global communities about rich and diverse musical and cultural traditions from China.

The center is housed in a 3,200-square-foot space at MTSU’s Miller Education Center on Bell Street and is comprised of a gallery of Chinese musical instruments, a library and archives, and two classrooms. Learn more at https://www.mtsu.edu/chinesemusic/index.php.