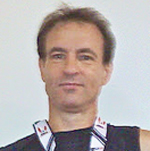 MTSU School of Music professor William Yelverton was in Bloomington, Ind., in 2010 for a solo guitar and lute concert at the Indiana University International Guitar Festival.

He was back in Bloomington in 2012, but for a different kind of performance: sprinting in the USA Masters Indoor Track and Field Championships.

Yelverton, who runs, hikes, and boats regularly when he’s not teaching classical guitar and coordinating the Guitar Studies Program at MTSU, won the Men’s 400-Meter Dash competition for his age group March 16 in Bloomington with a time of 55.90 seconds.

The professor also captured a fourth-place finish in the 200-Meter National Finals with a time of 25.43 seconds.

Yelverton, who will turn 52 this year, frequently competes in sprint events in local meets at MTSU, TSU, Vanderbilt, and Sewanee alongside athletes that are more than 30 years his junior. He also holds the 400-Meter Dash record for the Tennessee Senior Games in his age group.

“It was unexpected, but it sure makes this spring very sweet,” Yelverton said. He added that the win was even more fun because he “got to go to a fancy restaurant with my dad and hear my former student Luke Finney, an IU doctoral candidate, entertain us on classical guitar.”

Just after his National Championship win, Yelverton competed on March 24 at the Vanderbilt Black and Gold Meet, sprinting the 400-Meter Dash in 55.79 seconds, despite racing in a torrential downpour. He beat two college sprinters and logged the top-ranked time in the nation for his age group this season.

Yelverton has been recruited by the Greater Philadelphia Track Club to compete at the Penn Relays before an expected crowd of about 50,000 at Franklin Field on April 27.