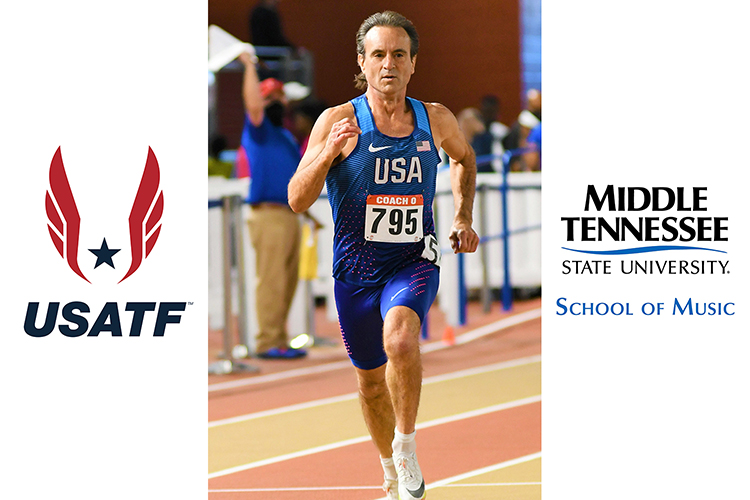 A Middle Tennessee State University School of Music professor renowned for his classical guitar artistry is on pace for another year of speed on stadium tracks nationwide as one of “America’s fastest men” his age.

Dr. William “Bill” Yelverton, director of the guitar studies concentration in the School of Music’s Instrumental Performance Program, was asked to run in the Masters Exhibition 800-meter event “that showcased America’s fastest men over age 60” at the recent Toyota USA Track & Field National Championships in Eugene, Oregon, according to a USATF press release.

In that June 26 exhibition race, Yelverton finished third, following a former all-American and the American record holder in the men’s aged 60 to 64 mile category in what was only his fourth 800-meter competition.

A video capturing Yelverton’s introduction at the University of Oregon’s Hayward Field — and a mention of MTSU — is available below.

Yelverton, 61, is a seven-time USATF Masters National Champion 400-meter/200-meter sprinter. He competed in 16 track meets in 2021, ending the race year as the world’s fastest 400-meter sprinter over age 60. His world-leading time was 1.33 seconds ahead of his nearest competitor.

At the 2021 USATF Masters National Championships in Ames, Iowa, Yelverton won national titles in the 400- and 200-meter events as well as a silver in the 800 meter and a bronze in the 100 meter, becoming the first person in USATF Masters history to medal in all four events at a national championship in his age group.

“It was like a dream, stepping out onto the storied Hayward Field track at a US championship and being introduced on the big screen — definitely a lifetime memory,” Yelverton said of his recent adventure.

“2021 was an exceptional year for me, and as a result, I got the invite to this meet.  I’m just happy to be able to participate this year, despite being a bit slower due to an injury. I’m still doing OK with my ‘B-game,’ though. After two years at No. 1 in the world in my age group in the 400-meter (competitions), I’m now ranked just No. 4. But the season’s not over; the adventure continues. I’m off to Finland for the World Masters Athletic Championships this weekend.”

The USATF Masters program offers local, regional, national and international competition opportunities in track and field, long-distance running and race walking for athletes 35 and older and 25 and older at the USATF Masters Track and Field Championships. The events are open to athletes at all levels of ability.

Yelverton, who is beginning his 34th year on MTSU’s faculty, is an award-winning classical guitarist whose eclectic recital programs often include jazz, folk, Latin and flamenco along with early music performed on Renaissance lute.

He’s performed throughout the United States, Europe, Mexico, Canada and the Caribbean at music festivals, in live radio and television appearances and guest artist recitals at universities and music societies.

Yelverton earned a doctorate in guitar performance from Florida State University and has presented master classes around the country, including at the National Guitar Workshop’s “Classical Summit” in Connecticut.

He is a founding member of MTSU’s acclaimed faculty ensemble-in-residence, the Stones River Chamber Players, and his guitar students have earned national and international recognition and have gone on to careers in teaching and performing.

Yelverton’s 2020 performance of 16th-century composer John Dowland’s “Fantasia” on a Renaissance lute in All Saints Chapel at the University of the South in Sewanee, Tennessee, where he also serves as a visiting professor of guitar, is available below.

For more information about the Instrumental Performance Program at MTSU, visit www.mtsu.edu/programs/instrumental-performance. Details on the School of Music’s departments, special events and more are available at www.mtsu.edu/music.

To learn more about the USATF Masters program, visit www.usatf.org/programs/masters.