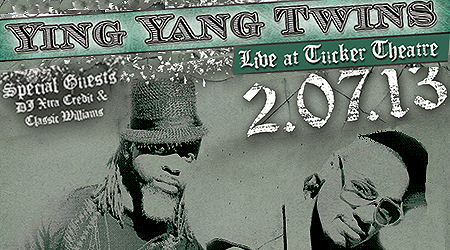 Atlanta’s own Grammy-nominated Ying Yang Twins, whose music brings club patrons as well as NFL fans to their feet, will appear at MTSU Thursday, Feb. 7, in a special appearance at Tucker Theatre.

Tickets are on sale now at www.mtsu.edu/events. Advance student tickets are $10 each, and advance public tickets are $25. Tickets also will be available at the door for $25.

Ying Yang Twins, also known as Kaine and D-Roc, have performed together since 1997, after mutual friends brought them and their music together. Their 2000 debut single, “Whistle While You Twurk,” catapulted them into a national package tour and a guest appearance on Lil Jon’s 2002 hit “Get Low.”

Their success has continued in the last decade with party singles like “Salt Shaker,” “Badd” and “Shake,” leading to a total of seven studio album releases, including the 2012 “All Around the World.” Their 2005 single “Wait (The Whisper Song)” netted a Grammy nomination for Best Rap Song.

Their 2005 single “Halftime (Stand Up & Get Crunk!)” has been played at New Orleans Saints games since 2006 and was the team’s unofficial anthem during the 2009 season that ended in a Super Bowl win.

Ying Yang Twins’ MTSU performance, which is presented by Raider Entertainment and co-sponsored by the Office of Intercultural and Diversity Affairs, will feature special guests Classic Williams and DJ Xtra Credit. Doors will open at Tucker Theatre at 6 p.m. on Feb. 7, and the show will begin at 7:30 p.m.

For more information about the Feb. 7 show, visit www.mtsu.edu/events or email concerts@mtsu.edu.