A fully online program is flexible for every type of student, including those taking graduate level courses. For those who participate in the Master of Library Science program at Middle Tennessee State University, it can even work for those who finished their undergraduate work nearly 30 years ago.

Take Courtnay Zeitler, who graduated from college in 1989. She jokes that she remembers card catalogs and Madonna from back then, but she’s learned a lot since, too. She’s finished her Master of Arts in English, gotten married, became a teacher, got a school librarian licensure, and been a stay-at-home mom to her three kids for a decade or so. Oh yeah, she also trained for a couple marathons. 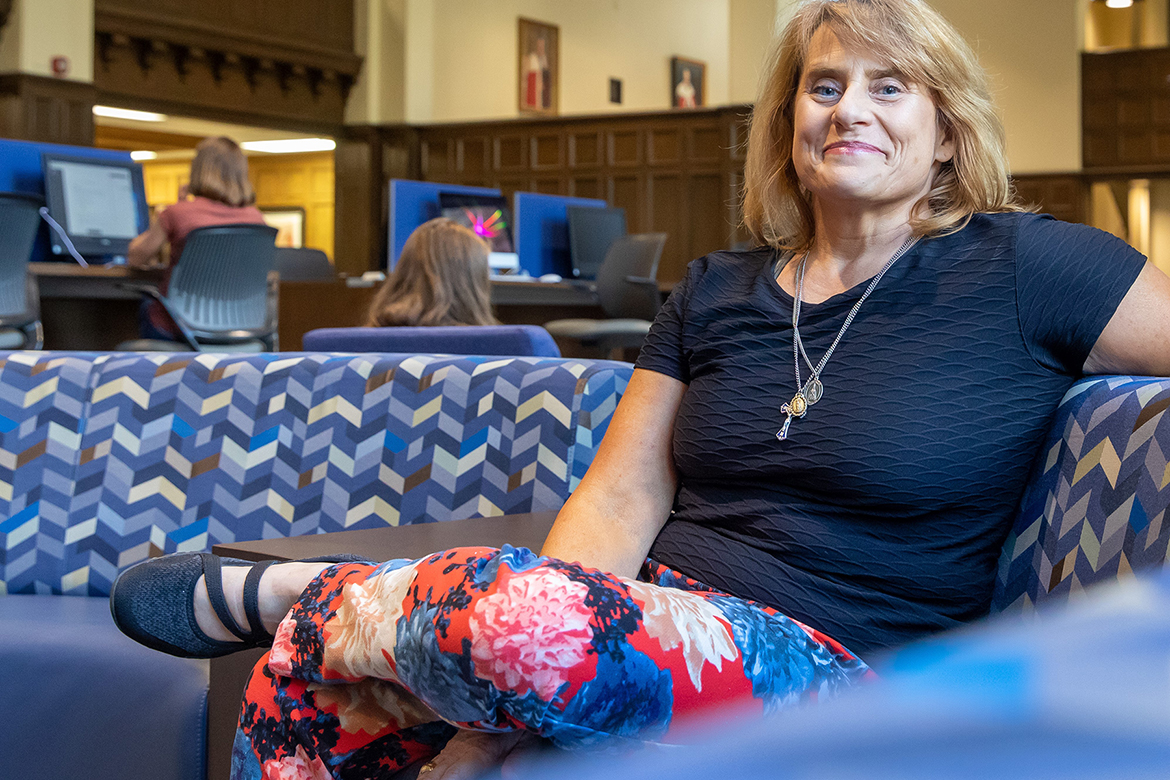 Even after accomplishing all that, Zeitler, who lives in Sewanee, Tennessee, says she felt led to advance her career, graduating from MTSU’s MLS program in the spring of this year.

“I felt led to teach and to communicate the power and skill of academic research,” said Zeitler, the head of access services at the Jessie Ball duPont Library at The University of the South. “So, I thought, ‘what can help me get to the next level?'”

Zeitler says she chose MTSU’s program because it was accessible, affordable, and flexible. The program was fairly new at the time, and she said she liked getting on the ground level of an emerging program where she would find enthusiastic and ambitious faculty.

“I had visited MTSU’s library before, and I knew how fabulous it was,” Zeitler said of the James. E. Walker Library, which just celebrated its 20th year.

Even though she loves being in the classroom, both teaching and learning, Zeitler said an online program was going to be the only one that worked for her currents stage of life. Or, as she puts it, living with her husband on a mountain, working full time, raising three teenagers, etc.

“Committing to an online program developed specific library science skills; within the context of each class’ requirements, my research and problem-solving strategies were consistently called upon in some new way,” she said. “Because I was currently employed at a library during my MLS adventure, I had ample opportunity to hone and integrate these lessons into my library practice on a daily basis.”

‘Learned so much about myself’

Zeitler said the program was rigorous and would test anyone’s endurance and integrity in new ways.

“For some of us who are a little bit older, you might have moments where you are sitting at your kitchen table — because you don’t have a desk, you have a kitchen table ­­­— and you yell out into the void, ‘Whose idea was it to go back to graduate school in my late 40s?'”

Even though it was difficult, the now 52-year-old said she wanted to work to become the librarian she knew she could be and that her community really needed. She called going back to school a privilege and feels that she is now equipped to advance her career and take on new responsibilities.

Before starting the MLS program in 2016, Zeitler had a lot of graduate school under her belt. However, most of that was from when she was in her 20s, did not have kids and could focus intently on her academic pursuits.

“A quarter of a century later, not so much. My attention span, ability to concentrate for longer than 10 minutes, new technology — all of these factors in play meant that it took me twice as long to turn out an assignment I could put my name on,” she said.

Her hard work and dedication to each and every assignment was worth it to her. She said she was proud of the portfolio of work she put together and turned in last May. To her, the portfolio represents an “artifact of three years of (her) family’s life.” Whether it be reading, writing, or research, Zeitler said she was devoting a lot of time to the program, causing her to miss family meals and walks with her husband.

“My husband, Rob, and my children, Emmy, Blaise and Payton — they too share this MLS degree with me,” she said. “My commitment to accomplishing it was, in many ways, theirs as well. As is my joy in its completion!”

Zeitler had some advice for anyone choosing to enroll in the Master of Library Science program or any graduate program for that matter. First, decide that you are all in. Committing to the program meant putting other things lower on her priority list for a few years. Second, expect it to be hard.

“This process has been difficult,” she said. “I can tell you the worthwhile things in life usually are. I learned so much about myself during this journey and I am grateful for the opportunity to show myself and the world that hard work wins, and information is power, and librarians are always the smartest people in the room.”