MTSU recognizes 4 of its fines.. 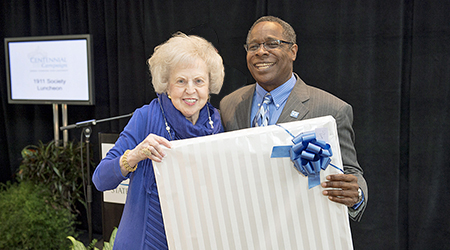 MTSU held the inaugural 1911 Society luncheon recently to recognize those community members who have made financial commitments to the university for the long term.

The group, named in honor of MTSU’s founding year, celebrates individuals and families who have created gifts to the university through their estate plans.

Also honored at the April 19 event were members of the Signal Society, which honors annual donors who have supported the university in 20 or more years. The group is named for Middle Tennessee Normal School’s first newspaper/magazine, The Signal, which was originally published in 1912.

Bill Mooningham, president of the MTSU Foundation, gives remarks at the inaugural 1911 Society luncheon on April 19 inside the Tom Jackson Building.

Signal Society members honored at the recent luncheon inside the Tom Jackson Building were those members who have donated for at least 40 years.

Attending the luncheon were 24 members of the 1911 Society and 17 Signal Society members.

“We’re here to honor you,” said President Sidney A. McPhee. “‘Thank you’ is inadequate. But we will try to express our gratitude to you.

“It’s humbling to me to see and to experience and to recognize that so many of you care so deeply about our university … that you have made us part of your long-term estate plans.”

McPhee noted that earlier in the day, the university celebrated the transfer of ownership of property on Bell Street from Middle Tennessee Medical Center to the university. The purchase of that property for $11.1 million was made possible in large part because of a donation from an alumnus.

Witherspoon said the campaign already has reached the $62 million mark, with several other projects in the works to get closer to the $80 million goal. He noted that 16,000 donors have made contributions to the campaign so far.

MTSU President Sidney A. McPhee presents donor Pamela Zimmerman, left, with a framed rendering of Kirksey Old Main at the inaugural 1911 Society luncheon on April 19 at the Tom Jackson Building.

Among them are he and wife Hannah, longtime supporters who met on the MTSU campus.

“We think it was one of the most important decisions of our lives to come here, and now we have the opportunity with you to help other people realize their dreams and achieve their goals through our support of MTSU,” he said.

He reminded the crowd that the campaign had four distinct goals: maintaining a strong student population with scholarships, fellowships, travel abroad opportunities and research grants; ensuring the “highest quality” faculty and staff; improving the physical plant of the campus; and increasing the competitive level of the athletic program.

Music student William T. Duke, a recipient of the Linse Bock Scholarship, thanked the crowd for their contributions, which help students like him pursue their undergraduate and graduate degrees without having to take on even more student loan debt.

“What really helps me out is that this scholarship … is not only paying for my undergraduate (classes), but that money is also going toward my graduate school, which is required of a vocal performance major like me if I want to have a job.”

The Murfreesboro native, a sophomore vocal performance major, said the scholarship allows him to focus on his studies more because he could work a part-time job and still pay for school, unlike some of his friends who had to take on full-time jobs.

“Your support means a lot for people like me and for so many of my peers,” he said.

In presenting the day’s awards, Joe Bales, vice president for development and university relations, noted: “We are extremely grateful for the tremendous support provided by our 1911 Society and Signal Society donors. Their contributions have established a legacy of lifetime support that will ensure the continued prosperity of the university.”

Members of the 1911 Society receive a framed rendering of Kirksey Old Main, one of the original buildings on campus, while Signal Society donors are presented with an engraved medallion reflecting their years of support.

For more information about making donations, go to www.mtsu.edu/development and choose from the selection of tabs about giving on the left.