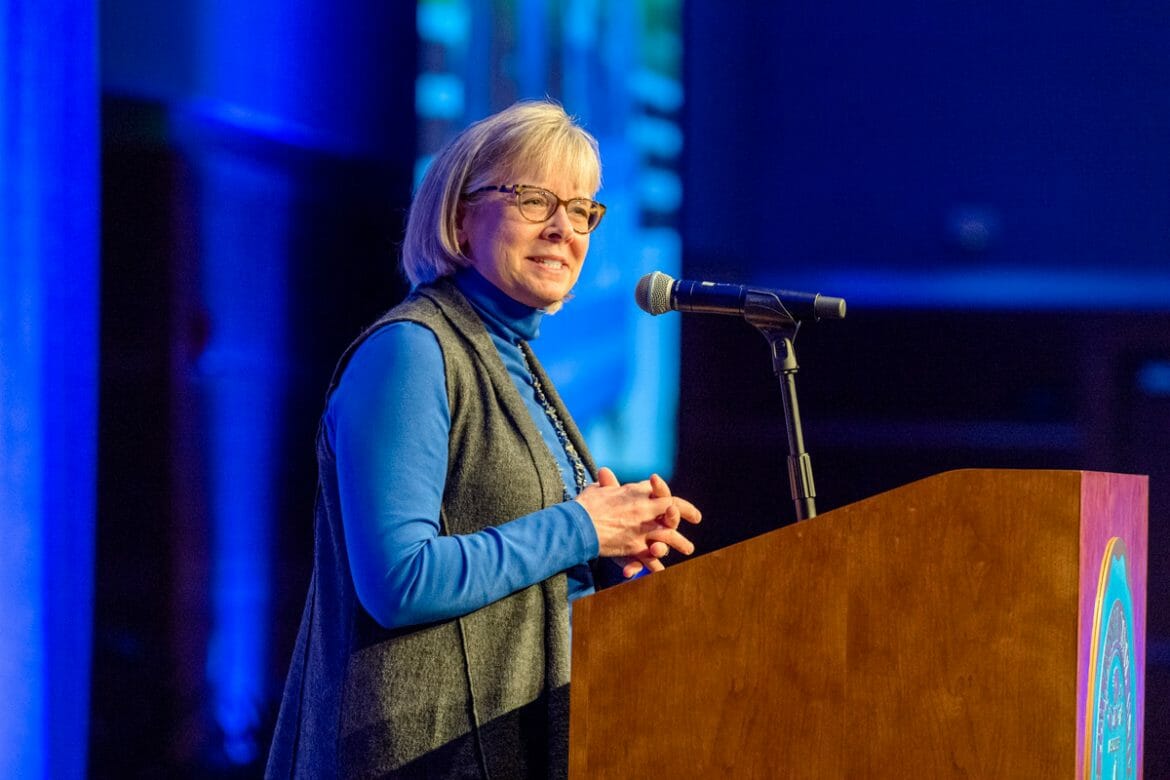 Today the Student Voice is tossing 20 questions at Dr. Debra Sells, MTSU’s vice president for student affairs and vice provost for academic and enrollment services. Dr. Sells started her MTSU career in 1996 as director of Housing and Residential Life, moved into Academic and Support Services in 2002 as associate vice provost, and was named to her current job in August 2008.

What kind of student were you in college?

I was a very good student. I was much more academic, and less social. I used to drive my roommates crazy because I would work ahead and have my final papers done a couple days early, and they’d be staying up all night trying to get them done in time. But mostly I did it because I was terrified of messing up. Even today, I have nightmares that it’s the end of the semester and I have to go take a calculus final, even though I’ve never been to a calculus class. Those nightmares never go away!

What Harry Potter house are you?

I’m probably a Hufflepuff. I’m very reliable, loyal, those sorts of things. I’m not really the adventurous one, or the sneaky or mean one, so I think that puts me in Hufflepuff.

What was the craziest thing you did in college?

Well, I went to a little school called Hope College in Holland, Michigan, and every spring they had a Tulip Time festival. I worked the Tulip Time festival and had to wear a full Dutch girl costume, with the hat and the little wooden shoes. Part of my job was going to the back room and scraping the “Made in China” stickers off all the replica Dutch china!

What was one of the dumbest things you did as a freshman?

I was a first-generation college student, so there was a lot that I didn’t know. I tried to get away with something that I think our students today try to get away with as well, because they don’t really understand it. There’s a concept called self-plagiarism, which says that you can’t turn in the same paper for two different classes. I wasn’t aware of that rule at all; I had written a paper for one class and got a very similar assignment in another class, so I tried to turn the paper in for two different classes. I got busted in the second class and had to rewrite the paper. I wasn’t intending to cheat, but I had no idea it was possible to plagiarize yourself, and I think that’s something that students today are still largely unaware of.

What is one of the funniest questions you’ve been asked by a student?

There are so many! Just this morning, someone posted on one of the class Facebook pages, “I am so effing tired of putting my money in the effing vending machines!”, and that’s all they wrote. I just wanted to write back, “Well, that’s how they work!” I mean, are you getting something out? Because if you are, that’s how it’s supposed to work! That sort of stuff just makes me laugh.

What Monopoly piece are you?

I was never very good at Monopoly! I’m probably the iron. I’m a hard worker, I make sure things look good, do my homework … very boring, but I get stuff done.

What was the weirdest job you ever had?

When I was 14, I got my very first job working at Baskin Robbins for 95 cents an hour, then I worked in a factory making notebooks. Probably the weirdest job I had in college was working the midnight shift in a Heinz pickle factory. I had grown up on a farm, and the people there knew I was a farmer’s daughter. The farmers would bring in these huge semi trucks full of cucumbers straight from the fields, and they’d have to drive to the factory and wait in line for the cucumbers to be weighed and graded. It was a long process, and the farmers would be tired from working all day. Part of my job was to do the sorting, and that was just a disgusting job. Then if the line of trucks got really backed up at night, I’d have to go out and apologize to the farmers and ask them to wait a little longer. If the men went out, the farmers all got mad at them, but if they sent little Deb out, they wouldn’t get mad at me!

What’s the coolest place that you’ve ever traveled?

I got to go to Edinburgh (Scotland) about 10 years ago, and that was a great trip. This summer, my brother and I are going to go to Paris and Amsterdam, and I’m really excited about that. More tulips!

What was the last thing you dressed up as for Halloween?

Gosh, it’s been a long time since I dressed up for Halloween … and I don’t even want to tell you what I did in college! Probably the last time I dressed up, I used that darn costume from the tulip festival.

What’s your most unique hobby or skill?

I don’t know if it’s unique, but one thing people probably don’t know about me is that I rode motorcycles for a while. I got rid of them a few years back, though. I also meditate every morning before I go to work; I have a meditation practice and I study with a meditation teacher, and it’s something that settles me. I guess I traded motorcycles for meditation!

What book have you re-read the most?

I read a book when I was in college by a man named Richard Bach called “Illusions: The Adventures of a Reluctant Messiah”. The one I’ve read a lot lately is by Thich Nhat Hanh, a Buddhist monk, and it’s his book on dying. My dad’s getting older — he’s 92 now — so I’m reading a little bit about dying and the next stage of whatever comes next.

What is something you collect?

I’m really not a big collector! In fact, I’ve been spending this past year downsizing and getting rid of stuff. I recently found this big box full of letters that people had written to me throughout my life. I spent about a month going through all those letters, and it was a really interesting process for me. There were letters in there from my father from when I had moved away to college; I’ve always thought of my dad as a grumpy old farmer, but these letters reminded me of a different side of him. But in the end, I decided to get rid of all of them in this purging process. I like a very clean, sparse living space where I can be calm, because work is not very calm!

What do you do when you’re stressed?

Well, like I said, I meditate, and I also run. I’m not a very good runner at all! But I do run to relieve stress sometimes.

What was your favorite childhood icon?

I was a big reader when I was a kid, and there were a whole bunch of book series back then about young, intrepid girl investigators, like Nancy Drew and Trixie Belden. I loved all of those! Also, by the time I was eight, I had a baby brother, and he was definitely my little toy doll. I didn’t need stuffed animals or toys anymore; I would just take my baby brother everywhere with me! We’re still close to this day.

What’s your favorite singer or band?

I’m a huge James Taylor fan, and I also really like the Eagles. Those are my two favorites.

What job would you be doing if you weren’t doing this?

I really don’t know! Ever since I started kindergarten at five years old, I’ve always been in some type of school environment. This is what I love, and it’s really been my whole life. I think I have the best job in the world. I wouldn’t trade with anyone.

Are you a cat person or a dog person?

I’m a dog person. Sorry —  just don’t get cats. They’re snooty! Dogs are goofy and funny, and they’re my favorite.

I love the bridge between the student union and the SSAC (OneStop). I love that it lights up blue at night and that it connects the two buildings on campus that are closest to my heart: the union, which is home to all of our current students, and the SSAC, which is where we greet all of our new prospective students.

What’s your favorite part about being a Blue Raider?

MTSU has really become my home! Which is weird in a way — I grew up in Michigan, and I’m a Yankee through and through, and I never thought I’d ever move to the South. Then I decided to come here, thinking I’d just stay for a couple of years, and that was 21 years ago! I put down roots and made really great friends. I’ve asked myself a hundred times why I don’t move closer to my family, but there’s something about this school and these students. I feel like I can have an impact on the lives of students here in ways that you can’t at other schools.