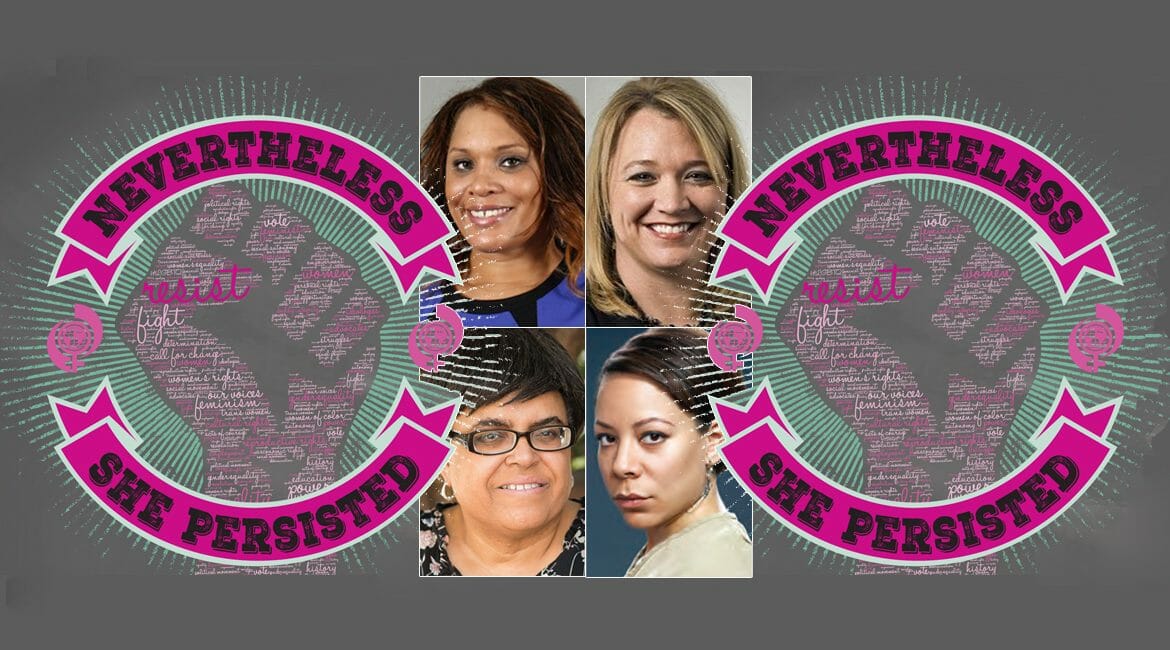 Click on the poster to see a full-size PDF version.

Award-winning actress Selenis Levya, who portrays jail inmate Gloria Mendoza in Netflix’s “Orange Is the New Black,” will speak to the MTSU community at 7:30 p.m. Monday, April 9, in Tucker Theatre.

Her address had been scheduled for Monday, March 19.

The event is open only to those holding current MTSU IDs, and seating is limited. A question-and-answer session will follow Levya’s speech. Doors will open one hour before the event.

With the monthlong theme of “Nevertheless She Persisted,” the opening ceremony for the month’s activities March 1 introduced the official button that is being distributed around campus.

Featured on the button is Tennessee’s own legendary college basketball coach, the late Pat Summitt.

Speakers at the opening ceremony included MTSU assistant women’s basketball coach Shalon Pillow and business owner Tiffany Woosley, both former players for Summitt at the University of Tennessee, Knoxville. You can read about the event, which also recognized five MTSU “trailblazers,” here.

State Rep. John Ray Clemmons of Nashville, co-sponsor of an equal pay bill in the Tennessee General Assembly, and Kimberley Churches, national AAUW chief executive officer, will be among the speakers.

Conference passes are $50 each or $30 for each student. A pass for Saturday only is $35. To register by the Monday, March 12, deadline, or for more information, visit https://murfreesboro-tn.aauw.net/2018-convention.

The documentary “Gender Revolution: A Journey with Katie Couric” will be shown at 4 p.m. Wednesday, March 21, in the Student Union Theater. The film, hosted by the former NBC News reporter and “Today Show” co-anchor, will explore the rapidly evolving changes in perceptions of gender identity.

MTSU history professor Marisa Richmond will facilitate a discussion following the film. Richmond, who also teaches courses in MTSU’s Women’s and Gender Studies Program, is a member of the Metro Nashville Human Relations Commission and the only openly transgender member of the Democratic National Committee.

Students will have two opportunities to rock the campus during “MTSU Women Rock” Thursday and Friday, March 22-23. On Thursday, students can paint words or pictures on small rocks to encourage love, unity and empowerment for women on campus at a table on the Keathley University Center’s second floor.

From 11 a.m. to 1 p.m. Friday, students will meet at the Center for Student Involvement and Leadership on the third floor of the Student Union to distribute the painted rocks.

Various campus organizations and departments will create the “Tunnel of Oppression,” which will be open from 10 a.m. to 4 p.m. Wednesday, March 28, in the Tom Jackson Building. The interactive exhibit will highlight several different types of oppression at the intersection of various communities.

With the exception of the AAUW conference and the Leyva speech, all National Women’s History Month events are free and open to the public.

For more information, contact Barbara Scales, co-chair of the National Women’s History Month Committee, at 615-898-2193 or barbara.scales@mtsu.edu or the Women’s and Gender Studies Program at 615-898-5910.