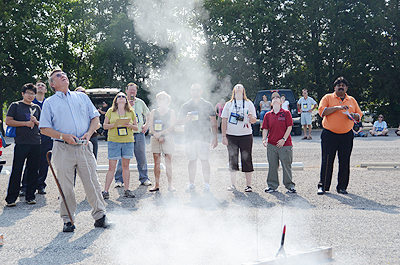 Marvin Nichols, front, a teacher at the Koss Center in Manchester, watches with fellow workshop attendees as his model rocket takes off at the MTSU Aerospace Education Workshop. (MTSU photos by News and Media Relations)

Thirty-eight teachers from across Middle Tennessee increased their knowledge in aerospace, aviation and the STEM areas while participating in the annual Aerospace Education Workshop at MTSU.

MTSU offers the three-week program each year for K-12 educators throughout middle Tennessee. This year’s 38 participants, who hail from 10 counties and 25 schools around the region, took the basic course.

The teachers will carry their new science, technology, engineering and math knowledge back to their respective classrooms, organizers said.

“The teachers have been very engaging as a group and are quite interested,” said Phyl Taylor, who directs the program for MTSU’s Department of Aerospace.

In the June 21 model rocket activity alone, where workshop participants built and then tried to launch a rocket in an MTSU parking lot, the class used physics, science, mathematics, history and geography.

“Everything we do is aligned with STEM standards,” added Taylor.

The teachers traveled to Pensacola, Fla., for a two-day field trip, where Taylor said they watched the U.S. Navy’s Blue Angels in action during a one-hour practice air show and toured the National Naval Aviation Museum.

Their schedule included other hands-on activities such as “Egg Drop” and “Delta Darts” and hearing from experts like former NASA astronauts Rhea Seddon and Robert “Hoot” Gibson. The workshops ended June 29.

Next year, both the basic and advanced courses will be offered.

To learn more about the program, call 615-898-2788 or visit http://mtsu.edu/aerospace and click on “Workshops.” You also can view a gallery of photos from the workshop below; click on each photo to see a larger version.