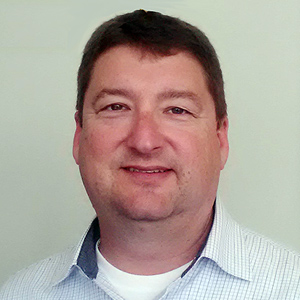 Brian Holley is settling in as assistant vice president for infrastructure within MTSU’s Information Technology Division.

In his new role, Holley manages the networking, security and telecommunications operations within ITD.

“That’s basically the computer infrastructure … the wiring, the networks, the backbone of the system, versus the applications and the things that the users see,” he said. “The users don’t see what we do.”

Holley, who started in late March, came to MTSU from Jackson Energy Authority in Jackson, Tenn., where he oversaw IT operations at the municipal utility.

“My first day here was better than the best day at any other job,” Holley said. “This is a phenomenal place.”

Holley said the size of the university—2,000-plus employees, 26,000 students and a campus of 500 acres—has been eye-opening.

“The scope of what we do here, particularly in networking and security, is huge. … I had no idea the scope was as large as it really is.”

From maintaining 24/7 emergency-communications capability for the MTSU Police Department to supporting special events such as the Congressional field hearing held on campus earlier this month, Holley said he and his colleagues must work together to keep the university connected.

“Our job is to help people work better in all ways,” he said. “We are a service organization. ITD exists to serve the university.”

Holley’s wife, Sharon, teaches in the Nurse-Midwifery Program at Vanderbilt School of Nursing. She is the clinical practice leader for Franklin Road Women’s Health Center and works as a certified nurse-midwife for patients through that clinic. The couple has two adult children.