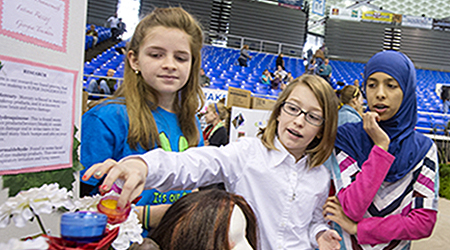 The 2013 Invention Convention at MTSU on Feb. 28 marked the event’s 21st year and featured more than 220 one-of-a-kind inventions from 431 young geniuses from across the Midstate.

The young inventors are public- and private-school students in the fourth, fifth and sixth grades in Coffee, DeKalb, Franklin, Robertson, Rutherford, Sumner and Wilson counties.

Each year, the youngsters create an invention fitting one of two categories: “Games” and “Make Our Lives Easier.” Judges select winners in each category, and participants also create presentations as well as working models of their inventions to display to visitors.

A featured invention also is selected for display each year, and the 2013 choice brought cheers from the entire audience: chocolate!

Murfreesboro businessman and author Greg Tucker, who also is the new Rutherford County historian, was this year’s Invention Convention guest speaker. He showed the young participants a history slideshow of invention, explaining that creativity and necessity often lead to great inventions.

MTSU’s Invention Convention, the brainchild of elementary education professor Dr. Tracey Huddleston in honor of her mother, a longtime educator and innovator, is sponsored by State Farm insurance.

Students, teachers, parents and judges prepare for the 21st annual Invention Convention inside MTSU’s Murphy Center Feb. 28. The event, coordinated by the Department of Elementary and Special Education, drew more than 431 young inventors from across Middle Tennessee with 220-plus creations to use as “Games” or to “Make Our Lives Easier.” (MTSU photos by J. Intintoli)