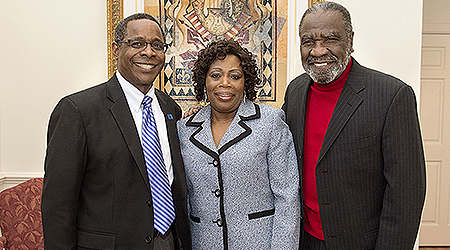 As the 2013 recipient of MTSU’s John Pleas Faculty Award, a humbled Dr. Newtona “Tina” Johnson soaked in the applause a moment as colleagues, friends and supporters paid tribute to her impact on the university and beyond.

“Wow. I’m flying right now,” she said after accepting the award during a Feb. 28 reception at the MTSU Foundation House on West Thompson Lane. “I am just elated.”

Dr. Newtona “Tina” Johnson, center, professor of English and director of the Women’s and Gender Studies Program at MTSU, is congratulated by President Sidney A. McPhee, left, and Dr. John Pleas, psychology professor emeritus, before a Feb. 28 reception in her honor. Johnson is the 2013 recipient of the John Pleas Faculty Award, which honors minority faculty members demonstrating excellence in teaching, research and service. (MTSU photo by Andy Heidt)

The John Pleas Faculty Award was created in 1997 to honor retired psychology professor Dr. John Pleas. It is presented annually to a minority faculty member who has demonstrated excellence in teaching, research and service.

In remarks before presenting the 2013 award, Pleas described Johnson as “a powerful woman” whose selection raises the bar for subsequent award recipients.

“Tina, I’m awfully proud of you. You have been a very strong force at the university,” he said. “You are in a pivotal position. … What you are doing will have greater ramifications outside of MTSU.”

As professor of English and director of the Women’s and Gender Studies Program, a position she has held since 2008, Johnson has overseen the creation of a graduate certificate program and is developing a new program track in sexuality studies/queer studies. She also expanded the focus of the program’s biennial conference to reflect a more international breadth and depth.

Dr. Tom Strawman, chair of the English Department, announced that Johnson has been awarded an American Council on Education fellowship for the coming academic year. He said she continues to transform the Women’s and Gender Studies Program.

“She is a savvy and intelligent professional in all ways, yet she manages to impart a warmth and camaraderie that is infectious and encourages collaboration,” Strawman said. “She’s a very effective leader and is able to motivate people to volunteer and work together to achieve common goals.”

Former student Shelley Maddox paid tribute to Johnson by sharing how Johnson’s teaching and mentoring has deeply impacted her and other students.

“Dr. Johnson helped me to find my voice, helped me discover my passion. And she taught me that my passion can be put to work in the service of others,” Maddox said.

“Sometimes, during the daily grind, you can forget the impact you can have on students. It can be positive or negative,” Johnson said. “I’ve always tried to do my best to make sure students leave with a positive view of what it is we have to do in this world.”

Johnson, who has been at MTSU since 1998, has developed and taught literature courses that focus on racial, ethnic, gender and global cultural diversities. Her research interests are issues related to women and gender, most notably in the fields of postcolonial and African diaspora literature and critical theory.

Dr. Gloria Bonner, special assistant to President Sidney A. McPhee, praised Johnson’s accomplishments as a director and professor as McPhee and several university leaders looked on from the audience.

“Both roles require a strong knowledge base, which you always have,” Bonner told her colleague. “It requires leadership, vision, integrity, passion for what you do and for the students you work with … and a lot, a lot of energy. That’s what you are known for.”

Johnson earned her bachelor’s degree in English with honors from Fourah Bay College, University of Sierra Leone in Freetown, Sierra Leone; her master’s degrees in English from Dalhousie University in Halifax, Nova Scotia, and in applied linguistics from Concordia University in Montreal, Quebec, Canada; and her doctorate in literary and cultural studies from Emory University in Atlanta, Ga.

“Thank you to all of you,” Johnson said. “Each one of you here has given me threads that have woven a very rich tapestry that is my career. … What gives me pleasure is the work that I do.”

You can watch a video of the event below.