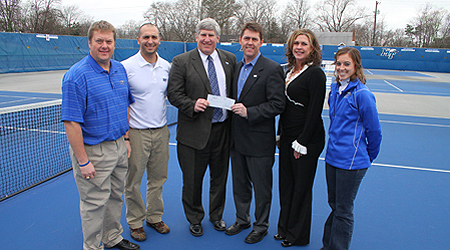 The naming recognizes a $50,000 donation from Shane and Amanda Reeves and the Reeves-Sain Foundation toward the construction of a $3 million facility being built by MTSU and the city of Murfreesboro.

Reeves, the mother of Shane Reeves and Marsha Saalfield, was an avid tennis player and coached the sport at Oakland High School in the 1980s.

“If she were living, my mother would be embarrassed to see her name on a court,” Shane Reeves said. “She was a private and humble person. She would be very proud that all her ladies’ tennis groups will have a place to play in our community.”

Alan Farley, MTSU associate athletic director, said Shane Reeves has been a leading advocate for the project after starting a memorial fund in his mother’s memory. Reeves serves as chair of the major gift committee for the community tennis campaign.

Carolyn Reeves’ “untimely death kick-started this campaign, as many friends and family gave to a memorial fund in her memory,” Farley said.

“She loved tennis and was a revered teacher in the community. This is a wonderful legacy for her.”

The project, part of the university’s $80 million Centennial Campaign announced in April 2012, includes plans for six to eight courts, locker rooms for men and women, a lobby, a viewing area for spectators, a laundry room and an electronic scoreboard.

The facility at Old Fort Park will be open to the general public and serve as the home of the Blue Raider men’s and women’s tennis programs.

Anyone interested in contributing to the project is asked to call Farley at 615-898-2210.