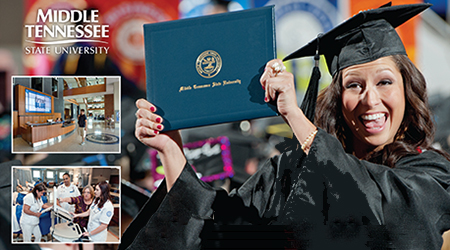 MTSU was the top and most efficient producer of graduates among Tennessee Board of Regents universities in 2011-12 and led all state institutions in granting degrees to adult and low-income students, a report released this week by President Sidney A. McPhee shows.

The statistics, complied by the Tennessee Higher Education Commission, are contained in the MTSU President’s Biennial Report, which was delivered to state lawmakers and officials Feb. 13 and 14. Among the report’s highlights:

“The Complete College Tennessee Act calls for colleges and university to focus on student retention, degree completion, improvement in the areas of transfer and articulation and institutional mission distinctiveness,” McPhee said.

“MTSU had already made those goals a strategic priority. When we say ‘I am True Blue,’ we are also reaffirming our devotion to student success.”

MTSU has the largest undergraduate enrollment among state universities and also is the No. 1 choice of the state’s veterans, transfer students and students enrolled in summer courses.

The report also noted that MTSU was the only Tennessee university to receive the Adult Learner Friendly Institution designation from the Coalition of Adult Learning Focused Institutions in 2012. Half of MTSU’s 25,000-plus students are classified as adult learners.

McPhee also noted in the document that MTSU is the only Tennessee university selected by the U.S. Department of Veterans Affairs for a “VetSuccess on Campus “ program. It also has been named a military-friendly institution for three years in a row by G.I. Jobs magazine.

An electronic copy of McPhee’s report is available on the MTSU president’s website, www.mtsu.edu/president.