MTSU ‘Saddles Up with St. Jude’ at Up ‘Til Dawn celebration 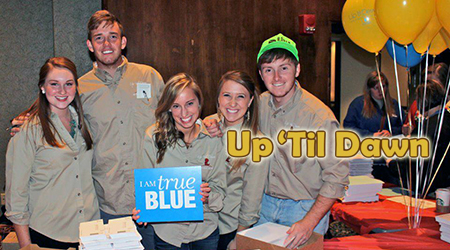 MTSU students are eager to celebrate their fight against childhood cancer at the annual Up ‘Til Dawn event.

The culmination of the campaign for St. Jude Children’s Research Hospital in Memphis is slated for 7 p.m. to midnight Saturday, Feb. 16, in the Student Union Ballroom.

The theme of the finale event is “Saddle Up with St. Jude.” It will feature live entertainment, food and giveaways by such sponsors as Volunteer Traditions, Southern Tide and Aspen Heights.

Supporters of MTSU’s Up ‘Til Dawn project celebrate the end of a November 2012 fundraising letter-writing event in the Student Union Ballroom that resulted in 3,500 cards and letters going out to potential St. Jude Children’s Research Hospital donors. (photo courtesy of MTSU Up ‘Til Dawn)

MTSU students and campus organizations have worked energetically since 2000 to help raise money for St. Jude, which is the university’s official student philanthropy.

MTSU was the second university in Tennessee to get involved in the Up ‘Til Dawn effort. St. Jude and the University of Memphis teamed up in 1999 for the first Up Til’ Dawn fundraiser.

The hospital, founded by the late comedian Danny Thomas in 1962, assures patients that no one will ever be turned away for inability to pay.

Admission to the finale event is $5.

For more information, contact Norman Paul Jacob at npj2c@mtmail.mtsu.edu, go to http://facebook.com/UpTilDawnMTSU, or call Up ‘Til Dawn Executive Director Michael Parks at 615-796-4146.