MTSU ‘Saddles Up with St. Jude.. 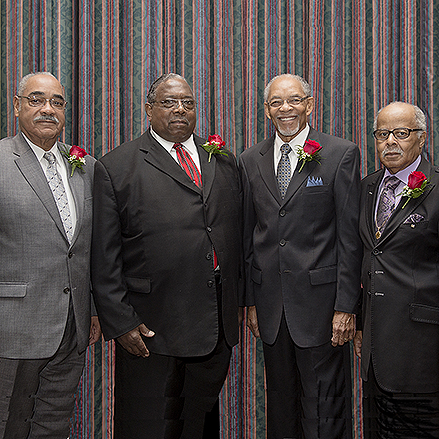 With more than 200 admirers and supporters looking on, four area pastors were honored Feb. 12 for their community service work during the 17th annual Unity Luncheon inside MTSU’s James Union Building.

The honorees at this year’s luncheon were:

Vincent Windrow, director of the MTSU Office of Intercultural and Diversity Affairs, said these “unsung heroes” were lauded not only for their commitment to their respective flocks but also for the impact they have had on the many MTSU students who attend their churches — whether they’re local students with deep roots in the congregations or students away from home who need spiritual guidance and support as they pursue their degrees.

The honorees were moved by the recognition.

“It really makes you feel great and humble for the recognition you have received,” Sibert said after the luncheon. “Sometimes you don’t think people really appreciate what you do, but this is a great testimony to the fact that they do appreciate what we do in the community as pastors and leaders … it’s a great honor.”

Dr. Forrest E. Harris, president of American Baptist College in Nashville, gave a rousing keynote address focusing on the “purpose of education” — at times drawing a variety of affirmations from event attendees as he harkened to Dr. Martin Luther King Jr.’s reference to people of all races being woven into a “single garment of destiny.”

Harris challenged the audience to look beyond themselves to make sure those around them — from relatives to neighbors to strangers — have an opportunity to develop their minds for the greater good.

“I am convinced, after nearly 40 years as a public educator, a theological educator, that the life of a mind to develop its intellect and capacity for good, is the most treasured gift with which each of us is endowed,” Harris said.

“It is our human and moral obligation to make sure that no mind goes to waste. The one thing that is common to our humanity is being created with the capacity to think, to learn and grow as human beings.”

That growth doesn’t occur in a vacuum, he noted, but within a broader human community that thrives best when unity toward a worthy goal — such as the civil rights movement — prevails. He cautioned that a truly good education goes well beyond developing a strong intellect.

“Hitler was a genius … but he used his intellect to organize evil,” Harris noted, whereas other human rights crusaders such as King, Ghandi and Jesus Christ showed how “a good mind and a good heart” could be forged “to create a deep sense of justice.”

The 2013 Unity Luncheon honorees, from left, are Elder Franklin Hollie, the Rev. Tolbert Randolph, the Rev. Freddie Carpenter Jr. and the Rev. Richard Sibert. The luncheon was held Feb. 12 at the MTSU James Union Building. (MTSU photo by Andy Heidt)

“I want education to teach brothers and sisters how to treat each other,” he said.

“We’re here to honor four extraordinary spiritual leaders of our very own,” Bonner, who leads the Office for Community Engagement and Support as an assistant to the president, told the crowd.

“Their commitment to the local community is commendable, and we salute each of them for their very deserving recognition. Thank you, pastors, for showing us what exceptional service really is.”

The luncheon concluded with a special audio/visual presentation of “Lift Every Voice and Sing” featuring a slideshow of King throughout the civil rights movement.