Alumni discover the science of.. 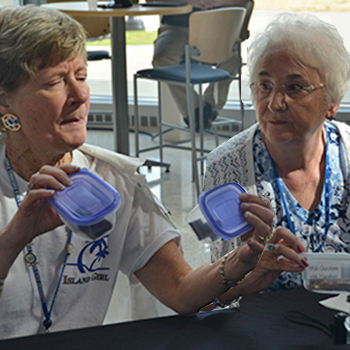 The largest turnout in the eight years of the MTSU Alumni Summer College performed “research” and “investigated” virtually everything science-related at MTSU.

Two days of exploring the Science Building, which opened in August 2014 and houses the biology and chemistry departments, research labs, offices and much more, prepared the 80 “alumni students” for their June 26 field trip to the U.S. Space and Rocket Center in Huntsville, Alabama.

In this year’s Alumni Summer College with the theme of “The Science Around Us,” the alumni and university friends learned more about MTSU’s 5-year-old unmanned aircraft systems operations through Doug Campbell, the aerospace department’s director of the UAS program.

A special highlight was hearing from Murfreesboro native Dr. Rhea Seddon and her husband, Robert “Hoot” Gibson, former astronauts who both are members of the U.S. Astronaut Hall of Fame. Seddon signed copies of her new book, “Go for Orbit.”

Louise Monefeldt, left, of Holtsville, New York, looks to see what variety of chocolate she will taste June 25 as Ann Nunley of Murfreesboro picks out her next sample in the Science Building’s Liz and Creighton Rhea Atrium. “The Science of Chocolate” was one of the course offerings during the eighth annual Alumni Summer College. (MTSU photo by Randy Weiler)

“Our participants have come from several different states,” said Rhonda King, an Office of Alumni Relations assistant director. “Our alumni and friends have come back to college for lots of fun classes, interactive sessions and a great field trip.”