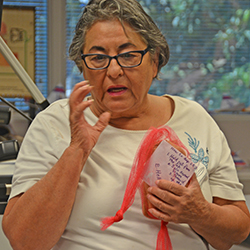 For three weeks every June, K-12 teachers from across the Middle Tennessee region gain new insight into aerospace.

They attend the Tennessee Aerospace Educators Workshop at MTSU.

The College of Graduate Studies course familiarizes teachers from across the region with the effects of flight as the dominant form of transportation in this country and its impact on society.

The course, for both first-time and advanced students, expands their educational horizons. They receive free materials, have an introductory flight lesson, take field trips and more.

Best of all, the nearly 40 teachers can take the knowledge they’ve gained back to their respective classrooms.

“Everything we do, I love to take back to the classroom,” said Amy Townsend, a teacher at Shelbyville (Tennessee) Central High School. “Science and aerospace goes so hand in hand.”

“In one project we worked on, we were dealing with gravity, thrust and lift, and so many different principles and laws and things like that that students study in the high school level as well,” she added.

The workshop, which is provided through a Tennessee Department of Transportation grant, just completed its 58th year.

“There’s a lot of history here,” said Phyl Taylor, the workshop director who has been a part of event staff for 25 years.

In mid-June, the group ventured by bus to Pensacola, Florida, to tour the Naval Air Museum and view a Blue Angels practice flyover.

Murfreesboro native Dr. Rhea Seddon and husband Robert “Hoot” Gibson, both now members of the U.S. Astronaut Hall of Fame, were among those making presentations. Seddon signed copies of her book, “Go for Orbit,” which is now available.

The activities include “egg drop” — placing an egg in a vessel and trying to keep it from breaking after being dropped from a four-story MTSU parking garage, Delta Darts and hot-air balloons.

To learn more about the summer workshops or to apply for the 2016 class, email Phyl Taylor at Phyl.Taylor@mtsu.edu, visit www.mtsu.edu/aerospace/workshops.php or call the MTSU aerospace department at 615-898-2788.

K-12 teacher Carl Keating explains how the egg inside his “bag of cotton balls” vessel will survive before the June 24 egg-drop contest.