America’s entry into WWII lives in music on ‘MTSU ... 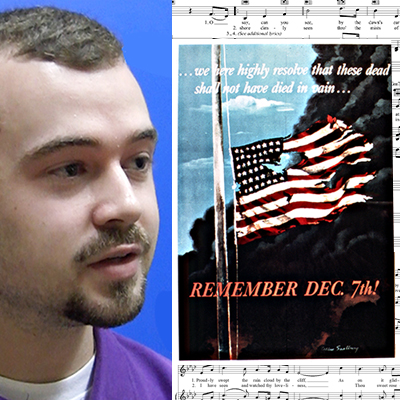 An MTSU student who was inspired to set Pearl Harbor to music was the guest on a July 2015 edition of the “MTSU On the Record” radio program.

This poster, designed by artist Allen R. Sandburg, was issued by the Office of War Information, Washington, D.C., in 1942 in remembrance of the Japanese Attack on Pearl Harbor, Dec. 7, 1941. (Illustration courtesy of the U.S. National Archives and Records Administration)

Host Gina Logue’s interview with student composer Blair Boothe first aired July 6, 2015, on WMOT-FM (89.5 and www.wmot.org ). You can listen to their conversation below.

Boothe, then a senior from Culleoka, Tennessee, majoring in instrumental music education, introduced “A Date Which Will Live in Infamy” in an April 30 performance by the Columbia Winds at his alma mater, Columbia Central High School.

Columbia Winds is a 50-piece band of high school juniors and seniors who play woodwind, brass and percussion instruments.

Boothe said he was inspired to compose a piece that recalled the opening salvo of America’s involvement in World War II by watching a History Channel documentary.

“In my compositions, I like to think of a story or a progression of events or an item or a person, something that the audience can relate to as they listen to a piece,” said Boothe.

“So, during the Pearl Harbor piece, I like for them to be able to go through in their head and, by what they’re listening to, be able to tell what’s taking place.”

Musical segments of “A Date Which Will Live in Infamy,” taken from the April 30 performance, are included in the broadcast.

Boothe, who graduated in 2016, is now a staff member with the Columbia Central High School Band, where he oversees the horn line of the marching band, instructs classes, composes and arranges music and assists with all aspects of the school’s band program.

A video clip of the interview also is available below.