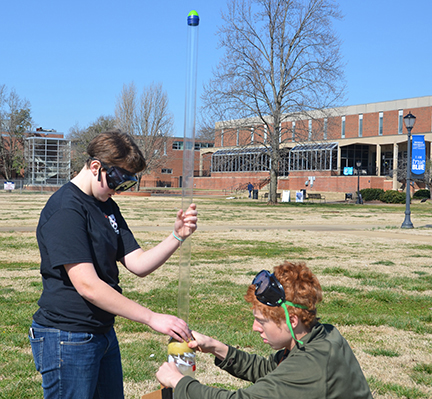 After matching scientific wits with hundreds of fellow students from the region, students from Central Magnet School of Murfreesboro and Brentwood, Tennessee, captured the respective high school and middle school divisions at the 21st Regional Science Olympiad at MTSU Feb. 27.

St. Andrew’s-Sewanee eighth-graders Emma Diamond, left, and Aidan Smith make a last-minute adjustment to their rocket in the Bottle Rocket event during the 21st Regional Science Olympiad at MTSU Feb. 27 in an area outside the Science Building at MTSU. The school is located in Sewanee, Tennessee. (MTSU photos by Randy Weiler)

Science Olympiad competitions are like academic track meets, consisting of a series of 23 team events in each of the high school, middle school and elementary divisions, the national organization’s website, www.soinc.org, says.

The elementary competition will be held Saturday, April 30, at John Pittard Elementary School in Murfreesboro.

Some of the events are rotated ever year to reflect the ever-changing nature of genetics, earth science, chemistry, anatomy, physics, geology, mechanical engineering and technology.

About 400 students competed at MTSU in such events as “Bottle Rocket,” “Crave the Wave,” “Food Science” and “Reach for the Stars” for middle school students and “Game On,” “Robot Arm,” “Electric Vehicle” and “Invasive Species” for high school students.

“It was very exciting and very loud at our awards’ ceremony,” said MTSU chemistry professor Pat Patterson, the regional director.

Equally exciting for Patterson, she said, was every school earning a medal.

“I guess we did OK,” Fortuna said before learning the competition results and their team’s subsequent advance to the state event.

“It’s fun to do,” added Unni. “I like seeing the results of all your hard work over the weeks.”

The MTSU regional receives tremendous support from university faculty and students, who assist with the running of all 46 events. Most were held in the Science Building.

For more information about the MTSU regional, contact Patterson by emailing Patricia.Patterson@mtsu.edu or call 615-898-5085. To learn about the Tennessee Science Olympiad, visit http://tnscioly.utk.edu.