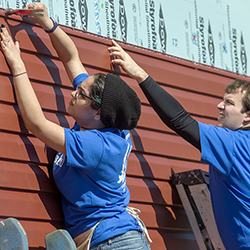 More than 200 MTSU students are part of two shifts of volunteer workers helping to provide a new life for a Murfreesboro woman and her family.

Groups and individuals from a number of university student organizations and MT Engage are assisting with the fifth MTSU Habitat Blitz Build for Habitat for Humanity.

They are volunteering their efforts to build a home for Sharnail Jones, who will be purchasing the approximately 1,100-square-foot house and property on South Highland Avenue near the downtown area.

MTSU seniors Yucera Salman, left, and Evan Lester hammer nails to stabilize vinyl siding Feb. 26 as they work on a Habitat home in Murfreesboro as part of an MT Engage and MTSU student organizations effort. (MTSU photos by J. Intintoli)

MTSU President Sidney A. McPhee visited the site Feb. 26, thanking students Evan Lester, Calla Sharp and Yucera Salman for their contributions to the effort to construct the home.

“This is wonderful, what you all are doing. Thank you for volunteering,” McPhee told the trio.

“Our students are making it a reality (for people in need) and making a difference in the community,” McPhee said later. “I am really impressed with their efforts. I met the homeowner and she is so grateful. Without it, she wouldn’t be able to own her home.”

Lester was spending his first day of volunteering. He is a senior aerospace flight dispatch major from Columbia, Tennessee, and a vice president of Phi Kappa Phi.

“This has been great,” he said. “I have enjoyed working with the volunteers. It’s nice to gain experience from those who are more knowledgeable than me and it’s nice to help the community out.”

Jones and son Keino Franklin, 11, and daughter KneOkei Franklin, 21, will move into the home in early April. The dedication will take place at 5:30 p.m. April 7.

KneOkei Franklin will eventually enroll at MTSU and major in education, Jones said.

“Oh, it’s truly a blessing,” Jones said. “Every day I ride by here to look at it. … All the students who have come out have treated me great. I’ve loved every minute of it and appreciate it.”

To contribute to the MTSU Habitat Blitz Build, which has an MTSU Foundation account, contact Jackie Victory at Jackie.Victory@mtsu.edu. Victory is director of leadership and service in the Department of Student Affairs.