Men invited to ‘walk a mile in.. 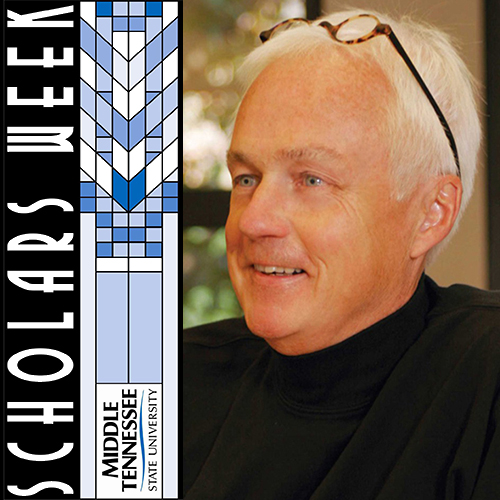 A folklorist with wide acclaim in arts, music and public policy discussed “Creativity, Career and Public Education” when he spoke on the MTSU campus earlier this week.

Ivey spoke March 28 in the Student Union Ballroom. The event was attended by a number of faculty and administrators.

Scholars Week emphasizes the research, scholarly efforts and collaboration of undergraduate and graduate students and faculty. You can learn more and find a complete schedule here.

“Bill Ivey is one of the nation’s leading thinkers on culture and creativity, and his insights into the arts and public policy are consistently thought-provoking and impactful,” said College of Media and Entertainment Dean Ken Paulson, who also serves as president of the First Amendment Center.

Ivey’s abstract for his MTSU talk reveals that “in an era when business, technology, economics and education are increasingly intertwined, he seeks to explore and define a balanced understanding of artistic expression, creativity, scholarship and their impacts on American democracy and quality of life.”

Ivey is a visiting research associate in the Indiana University Department of Folklore and Ethnomusicology.

Highlights of Ivey’s career include his service as:

Ivey is a trustee of the Center for American Progress, a Washington-based think-tank, and is the author of numerous articles and two books about art, public policy and politics: “Arts, Inc.: How Greed and Neglect Have Destroyed Our Cultural Rights” and “Handmaking America: A Back-to-Basics Pathway to a Revitalized American Democracy.”

Ivey has written and lectured extensively about the importance of cultural policy and the value of cultural engagement in the pursuit of a high quality of life. He coined the phrase “Expressive Life” to define the part of the human experience shaped by cultural heritage and creative practice.

The Distinguished Lecture Fund, Department of Recording Industry and College of Media and Entertainment are sponsoring his appearance.